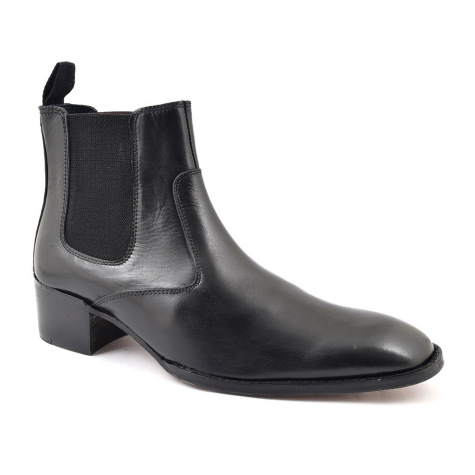 A rock and roll black chelsea boot with a cuban heel of 5cm height. The look is cool and the style mixes the 60s with modern day design.

The original look of the beatles was a black cuban heel chelsea boot and a dark suit, black or charcoal grey. Sharply cut with a white shirt and slim fit tie or black roll neck. Fashion cycles come and go but some looks are just wearable anytime. This is why we have created this image of a black chelsea with a simple silhouette and 5cm heel. The cuban heel stems from the shoes men wore doing the hot salsa and latin dances. They were added to the chelsea (made for Queen Victoria don’t you know) at the request of the four Liverpudlians and the rest, as they say, is history…..

So, the fist sighting of a man in heels is apparently on a 9th century Persian bowl. He is on horse back and going into battle. Over the many centuries that followed, heels were a status symbol and none more fond of highlighting that than the french aristocracy in the 16th century. Think Louis XIV and how intricately he had battle scenes depicted on his shoes and had the heel dyed red (as it was the most expensive dye to hand). The trend faded and lower heels became considered more macho with women taking on the mantle of the heel for years to come. As described above, men loved wearing cuban heels in the 60s and ranged from mods to rockers. Equally today, the look is versatile and indie to rock lover, suited to booted can wear the black cuban heel chelsea. You need confidence in your style and the rest is up to you.