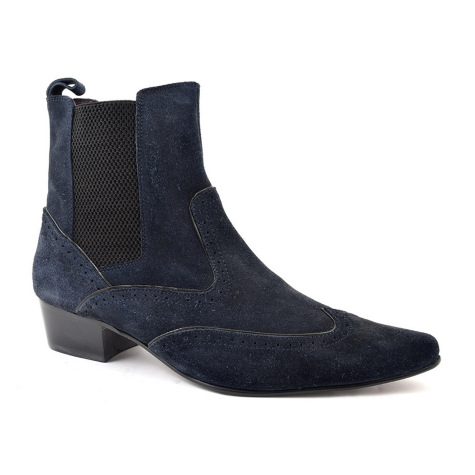 A navy suede cuban heel boot which has a chelsea boot style and brogue detail in the form of a wing tip. Contrast black side gusset with a decadent navy suede makes for a cool mens heeled boot. Swagger!

Another original design from us can be found in this mens navy suede heel beatle boot. This cuban heel boot is full of detail in terms of a brogue wing tip and perforation. There is a side gusset which defines this as a chelsea boot. The fact this mens boot has a heel should come as no surprise as back in the Persian era, men were known for wearing heels to go and fight in! Yes, they had their heeled boots firmly in their stirrups on their horses to give them a steady stance to shoot ammunition. Of course, mens heels went in and out of fashion over the centuries such as with the dandy Luoise XIV but it was more recently that they and a real resurgence. If we go back to the rock and roll era of the 60s, legends like The Stones and The Kinks wore ankle high boots as did the revellers around the Kings Road which led to this chelsea set giving this style of boot the name. Now the cool thing here is how the chelsea part and the cuban part relate in terms of that history. The Fab Four (hence the name Beatle Boot!) who came across the chelsea boot went to shoemaker Anello and Davide to create the said boot but with a cuban heel. This was so named as men in the world of Flamenco wore them. So here we have the cuban heel boot which Gucinari have created in many colours and textures like this navy suede cuban heeled beatle boot. To keep the navy suede in good condition we would recommend storing them in a dark dry place where they can breathe. Yes suede likes to breathe! Super cool mens heeled boots for you to rock your look in.