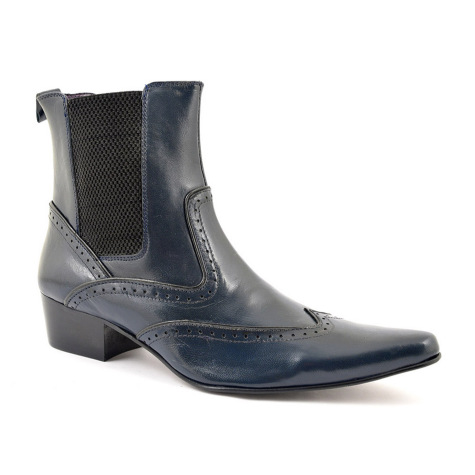 Funky navy beatle boots with a pointed toe and cuban heel. The wing tip and punch out detail add interest to the navy leather beautifully. Walk tall in boots that scream style. Interested in the origins of these? Scroll down for a brief insight.

Original style setters out there be warned. These navy cuban heel boots are not to be missed. The design has elements of a chelsea boot as there is the elasticated side which was made famous by Queen Victoria herself. She commissioned her boot maker to create a pair of shoes which she could walk about in and take off easily.  J Sparkes-Hall used the new invention known as vulcanised rubber (elastic) and did just that. Much earlier on, the idea of men wearing heels was one of practicality (believe it or not). Can you imagine going into battle with a pair of heeled boots on? Well, it would benefit you if you were on a horse in Persia in the 9th century. The heel would have kept you steady in your stirrups so you could aim and fire your arrows with aplomb. Of course, the dandy Louis XIV made the wearing of heels much more a frivolous affair. So how did the chelsea and high heel marry? The Kings Road in the heady 60s was awash with cool artists and creatives who wore such boots. Legends such as The Stones loved them. As did The Beatles who took that love one stage further and married the chelsea with a higher heel known as a cuban heel. Of course it was called that as men who danced Latino style wore them. They went to the States and these pointed toe high heel boots for men became all the rage. In fact you can check out Mr Gucinari wearing them in the 1960s on our about us page. What is great about this boot is the colour. A navy leather high heeled boot with hints of brogue for men who want to be original and stand out. You could create a grungy look with this navy cuban heel boot or wear with a slick suit and take notes form the Mods who did love to wear a chelsea. However you wear them, do so with confidence and check out our range of mens beatle boots as we at Gucinari believe men deserve choice, men deserve style.