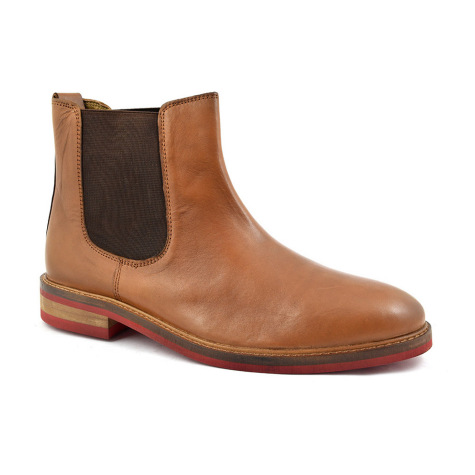 Here is a mens brown chelsea boot with a funky red rubber sole. Move over Louboutin! Seriously though, it was Louis XIV who painted his (heels!) red as this was the most expensive die and it carried a martial tone to it. There are flashes of red in the layered rubber and light leather which has a vibrant feel to it. The dark brown side gusset contrasts well with the light brown leather and this is the main characteristic defining this boot as a chelsea. We go back to royalty to explain this aspect but this time it is in the UK when Queen Victoria summed her bootmaker to create walking boots for her. J Sparkes Hall ingeniously decided to use the invention of vulcanised rubber to make the boot a pull up one. Of course, the prominence of the chelsea boot grew in the rock and roll sixties when men and women wore them as a statement of the times. Their heroes in music and film wore them (Dhillon, Lennon and Jagger) and the young cool set took them to an iconic place. The beatniks also furthered this and the sharp suits worn with chelsea boots became a uniform of anarchy for mods. This particular brown chelsea boot may be a bit difficult to pair with a suit but not impossible (nothing is impossible in the style options for men today). This designer brown chelsea boot would look very cool paired with jeans and a pea coat or a leather. It is your style, your choice as to how you express yourself with these funky red soled brown chelsea boots.