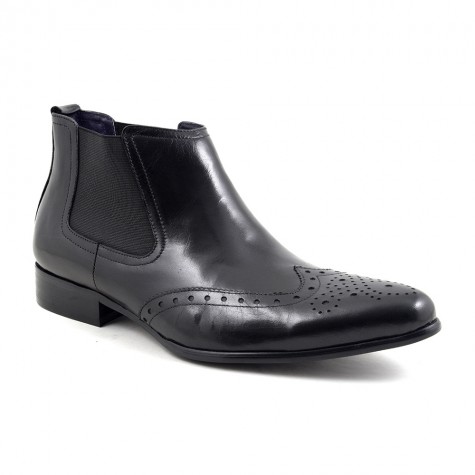 A waxed black brogue boots which can be worn dressed up or down. A versatile boot which has traditional broguing to the toe and a side gusset. It has a contemporary air with its pointed toe and will work well with your wardrobe.

This is a versatile and urban looking black brogue chelsea boot. It is defined by the side gusset which was invented in the states by Charles Goodyear. Then it was known as vulcanised rubber, now it is known as elastic. Queen Victoria loved wearing these boots when they were first invented by J.Sparks Hall and wore them pretty regularly. This elasticated boot had a low heel, was ankle high and had a tab to help pull them on and off. Of course, the jodhpur is similar and both boots became associated with riding as well as walking. They fell out of favour but by the 1950s and 60s came roaring back into fashion when the pop stars of the day took a fancy to them. As many creative types were hanging around the Kings Road in Chelsea in them, they took the name Chelsea boot.  The Rolling Stones were seen in them. The Beatles loved them so much they designed their own version with a slightly higher heel and they became known as the Beatle boot (or cuban heel boot). Check out our range of those, you will love them. Here is a crazy fact: chelsea boots were worn in the Star Wars films!

This cool black chelsea boot has brogue touches in the form of a ‘W” as well as decoration to the toe. Did you know that the holes in brogues originated from the need to extract water from the shoes of workers in Ireland and Scotland? The more brogue detail there is, the more informal the look can be. Even with such practical beginnings, we feel this mens slip-on boot straddles the world of formal and informal really well. You could wear them with dark skinny jeans and rock out. If you wore them with a suit to work, they would not look out of place either. Remember to stick a pair of boot trees or stuff some paper in them to keep the shape. For a guide to clean check us out here. We have a huge range of contemporary and cool black chelsea brogue boots for stylish men.