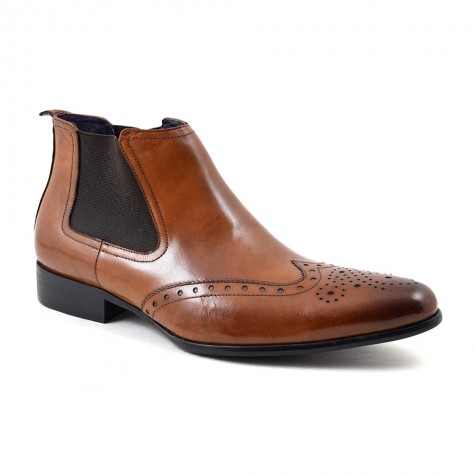 A warm chestnut brown makes this highly burnished brogue chelsea boot a winner.  It has classic broguing to the toe which bleeds into a darker brown. The side gussets are a darker brown and there is a tab for ease of wear. Simple but perfect.

Every man should have a pair of brown brogue chelsea boots. Of course, the main feature of the chelsea boot is the elasticated side panels known as gussets. Chelsea boots are ankle length, have low heels and traditionally, round toes. The elastic was known as vulcanised rubber and was invented in the mid 1800s. J Sparkes Hall was Queen Victoria’s shoemaker and was the man who invented this style of boot. Of course, the main point was ease of wear but it soon became fashionable with Royal approval. Probably first used as a walking boot, it made its way into the world of riding (these are similar to Jodhpur boots). Although the second world war diminished the popularity of this boot, it was the young artists, film makers and socialists who frequented the Kings Road in the 1950s who resurrected it. Rock royalty like The Rolling Stones and the Beatles began to love these. In fact, The Beatles added a heel to these much loved mens boots and created the Beatle boot or cuban heel boot (see here for our cool selection of cuban heel mens boots).

These brown chelsea boots have brogue detailing in the form of a wing tip and medallion. The design is contemporary in that they have a slightly pointed toe and the silhouette of the boot is a simple one. The result is that they would work really well in a semi-formal setting paired with jeans as well as in a formal one. They would not look out of place with a tailored suit, probably navy blue or grey for this particular pair of mens’ brown chelsea boots. Hark back to the mods who loved their image and did look very cool riding around on their mopeds! Now to the care of the king of boots. It is advisable to insert boot trees but if not, paper will do. This absorbs moisture and is good for odours or if you have drenched them in the rain. Use a soft brush to clean them off and polish them up: voila! You can find a wonderful guide to Chelsea Boots here: