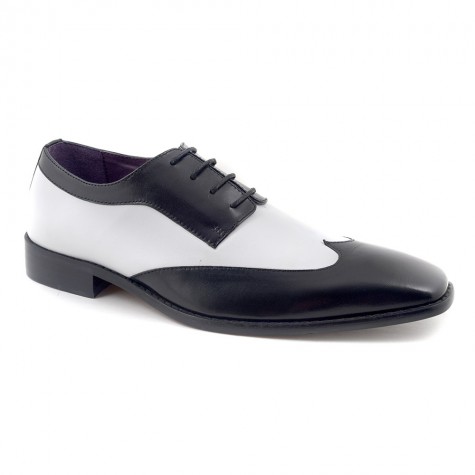 Evoke the Great Gatsby era with these black and white wing tip derby mens shoes. Dress shoes to finish off your formal attire with a jazzy vintage feel. Simply sublime.

You can imagine a smoky room with jazz musicians playing as they tap their feet in shoes like these black and white two tone derby shoes. Men have had a renaissance in wearing such vintage inspired shoes which are indicative of the 1920s and 30s. So where are the origins? Could it be from the spat? Some feel it is, some do not as a ‘spatterdash’ was not an actual shoe but outerwear which covered the ankle to stop mud and dirt getting on the shoe. Interestingly they were usually white! Reserved for the rich they fell out of favour in the 20s. However, some feel the spectator or correspondent shoe is more accurate a description. John Lobb, the infamous shoemaker claims to have made the fist spectator shoe as cricket shoe in 1868. Originally they were all white but Lobb added black leather to the areas that get dirty quickly and the spectator shoe was born. Called corespondents in England, they were known as shoes worn by more hedonistic men hence the links to the roaring 20s and gangsters. In fact the film ‘Some Like It Hot‘ which is set in the 20s made them famous again. The Duke of Windsor made it acceptable for gentlemen to wear them and although a flamboyant shoe, they are interesting and full of character.

This shoe has a  wing tip and is in the more traditional two tone colours of black and white. It has an open laced system which is a derby. Really this mean there are open flaps that the laces are strung through. This means they are easier to put on than say an oxford and it was the Earl of Derby’s shoemaker who had the idea to do this as the earl was on the large side. These mens black and white two tone shoes are a contemporary take on a jazz or spat and have strength but elegance. You can see in the images how cool they look with a bow tie so throw caution to the wind when it comes to traditionalists saying wear a black patent oxford to black tie events and try these.