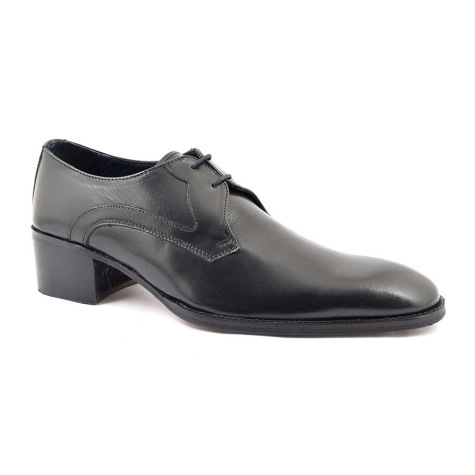 A black cuban heel shoe which harks back to the flamenco dance where men wore heels. It is a lace up with 2 laces and the heel is 4.5 cm high. A rather fabulous mens heeled shoe to be original in.

A lovely mens black cuban heel shoe which has a 5 cm heel and is in leather. Historically, it was masculine to wear heels as men in Perisa fought battle adorned in heels to get a good grip in their stirrups. The same can be said of cowboy boots today. The fashion for mens heels was transported to Europe and particularly men in France in the 1600s were taken with their heels. Think Louis XIV and you get the drift. His heels were pretty high and this became a symbol of status. For who need do anything practical in a pair of 10cm heels! Mens heeled shoes went in and out of fashion and in fact began to be worn by women along with short hair to become more masculine. As women took the mantle, mens high heels fell out of favour and a more somber way of dressing ensued. Then came the 60s when chelsea boots and cuban heels made a huge come back. The lacing on this shoe is a derby which means there are outer flaps which the eyelets are sewn onto meaning they are easier to get on and off than an oxford shoe.  These mens black cuban heels fit right in to todays original way of expressing oneself. So many rock stars loved wearing the cuban heel like The Kinks and The Stones. Today, many celebrities have a penchant for mens heels such as Noel Fielding. So wear these black cuban heel shoes with pride and fabulous style as only you can.