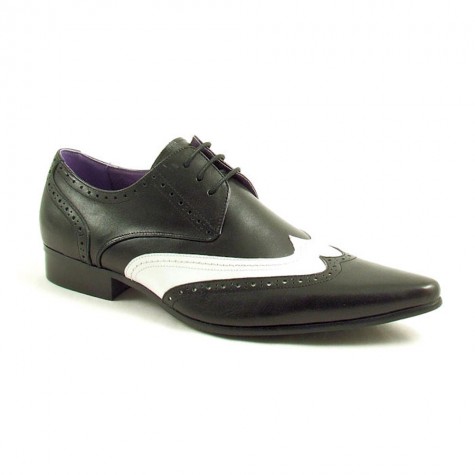 Evoke the 1930s 40s era in these spat derby mens shoes. Contrast black and white leather with punch out detail make these shoes stand out.

A funky pointed toe mens black white spat derby for dancing away in. So many words describe this shoe like spectator, jazz shoe or black and white two tone derby but lets start with spat. From the word ‘spatterdash’ (outer wear to cover and protect shoes and socks from mud and rain) these were made with white cloth, grey or brown felt material. Over time in the 19th and 20th century, this became a status symbol. Hence we call two tone shoes spats sometimes. Others may prefer calling them spectator shoes. This invention of John Lobb was to prevent all white cricket shoes getting dirty and hence a darker colour was included where the most dirt accrued: the toe and the heel. Of course, the tone of the shoes changed in the 20s and 30s when generally they fell out of favour (the streets became cleaner so there was less need for spats) and the underground scene, jazz in particular, took to wearing black and white two tone shoes. They became linked to a decadent scene and unsavoury characters. A perfect example is the mob boss called Spats Colombo in  ‘Some Like It Hot‘ set in the 1920s. So these rather wild two tone shoes have lots of character and history. Lets not forget the brogue elements to these black and white two tone derby shoes with the wing tip and the broguing. The pointed toe also lends a funky vibe to these black white spat derby shoes and we can see you dancing the jive all night long in them. Check the Gentlemens Gazette for a great article on mens two tone shoes.