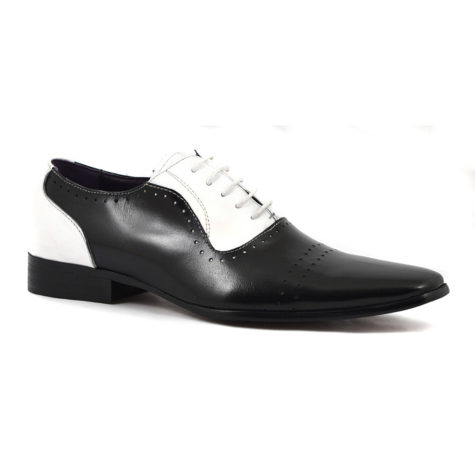 Jazz up your outfit with black and white oxford spats. These fabulous shoes have subtle punch out detail and are reminiscent of the 1930s but have a modern twist.

The word is form ‘spatterdash’ which was outer wear to cover the ankle and instep and protect shoes and socks from mud and rain. Traditionally they were made with white cloth, grey or brown felt material. Of course, it soon became a style feature worn by men (mostly) and women in the 19th and 20th century. They fell out of favour in the 1920s and of course, the streets became cleaner so there was less need for them!

Originally spats symbolised wealth and eccentricity…until in the  film ‘Some Like It Hot‘ set in the 1920s, the mob boss called Spats Colombo because he always wore Spats gave them a new infamy.

The Wingtip or Full Brogue

This is characterised by a pointed toe cap with ‘wings’ that run along both sides in the shape of a “W”. The toe cap of a full brogue is both perforated and serrated along the edges and includes decorative perforations in the centre of the toe cap. A fabulous guide to brogues can be found here:

Be the first to review “Firth Black and White Oxford Spat” Click here to cancel reply.