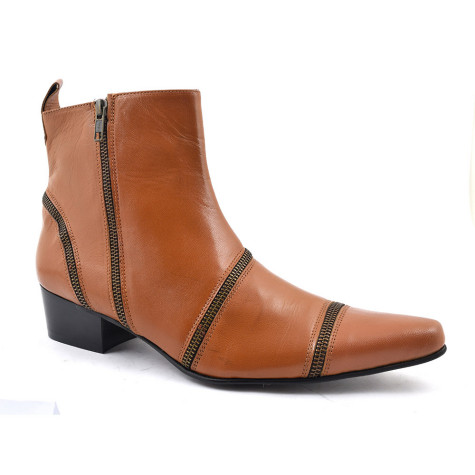 This tan zip cuban heel boot has a pointed toe with zips across it for an alternative indie vibe. The height of the heel is 45mm and the look is wild.

Fab tan cuban heel boots with a zippy look, quite literally! Men had serious intentions when first the heel came about. It was in war time Persia in the ninth century that men were seen to wear  heels in order to keep them rock steady in the stirrups of their horses so they could fire arrows on target. Who knew! Over the years, ostentatious royals like Louis XIV wore higher an higher heels to impress their status. After all, you couldn’t walk cobbled streets in these heels but why would you need to when you were the King of France.  Of course, the look disappeared as such frivolity caused revolutions in more ways than fashion. A more sombre and lower heel became essential to bring back seriousness and practicality.

The name cuban heel comes from the latin american dances where mens’ heels created an audio with their dance.  In the 1950s rock and roll era, men took to wearing heels again and the Teddy boys and the mods had their wars. Pointed toe winkle picker style boots were all the rage and still are with the Indie crowd. Think bands like The Horrors and The Kills, think Noel Fielding and Russel Brand. A pair of skinny jeans and these tan cuban heel boots will rock.