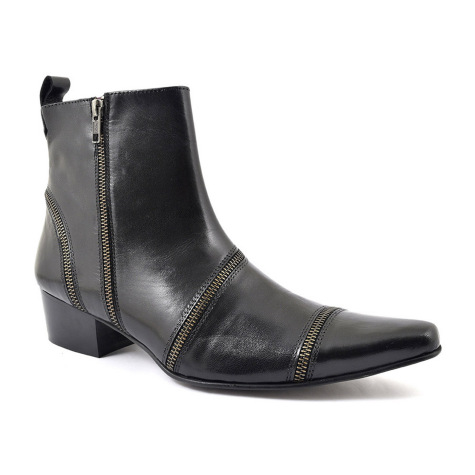 You can’t get more rock and roll than this black zip up cuban heel boot. It has an Indie feel to it and is very very cool. The heel is 4.5 cm and the zips are edgy.

Need funky edgy black cuban heel zip-up beatle boots? Here we have a pointed toe specimen with character and cool in large doses. This winkle picker has a cuban heel and an indie edge with the zip design. It is a rebellious look which would look awesome with skinnies and a lot of attitude. There have been many interesting names for such pointed to mens boots: beatle crusher and more debauched names like brothel creeper. The Moderninsts (forerunners to mods) wore these and Teddy Boys had a penchant for them too. Of course, The Beatles came onto the scene in the 60s and added the cuban heel and these became known as beatle boots. Roll onto today and so many scenes still wear these: goth, punk, indie. Think The Horrors, Noel Fielding, Russel Brand and you get the picture. We might add all of you are in good company as mens in heels in not only an expression of your personality, it was once the battle footwear of choice by soldiers in the Persian army. When on a horse in the 9th Century, heels would have kept men steady in their stirrups so arrows could be shot. The ultimate of macho, the idea came to Europe and thats how much history this mens heel has. Of course the ultimate historical male figure to don a pair of heels was Louis XIV and after him the look fizzled out. That is until the aforementioned revival which we are keeping strong today. So, whatever counter culture or place you come from, enjoy your black cuban heel zip-up beatle boots knowing what great company you have been in and will be.