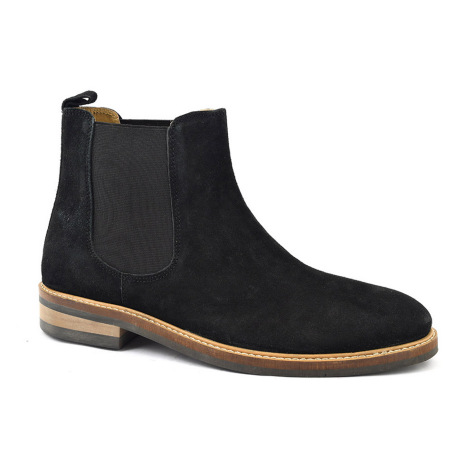 A very gorgeous mens black suede chelsea boot with a very solid sole crafted in leather and rubber for a durable stylish boot. It will come as no surprise that the chelsea boot is named after the cool Kings Road where hipsters and writers, socialists and creatives hung out in the sixties. What might surprise you is the original Queen of this style: Victoria! Yes. It was J Sparkes Hall who made her boots who was tasked with fashioning a pair of easy to get on and off boots for the royal lady. He identified vulcanised rubber as a material which could work and designed that into the side of a boot. Queen Victoria absolutely loved the idea and wore them as walking boots. Of course the elasticated side boot became rather desirable with her backing. Back to the 60s and the mens chelsea boot really took off. Super stars of the day wore black chelsea boots on stage, off stage, with suits, with skinny tight trousers. The beatniks and counterculture of the Mods took to this style of boot, particularly useful was an ankle length boot on a moped. More to the point, the stylishness of the black chelsea boot and how it looked paired with a sharp suit was very cool. As these black suede chelsea boots for men have a light looking sole, they would work beautifully with formal wear and of course, look dapper with jeans. The durability of a rubber sole goes a long way too. Designer mens black suede chelsea boots for an iconic, luxurious yet hard wearing look.