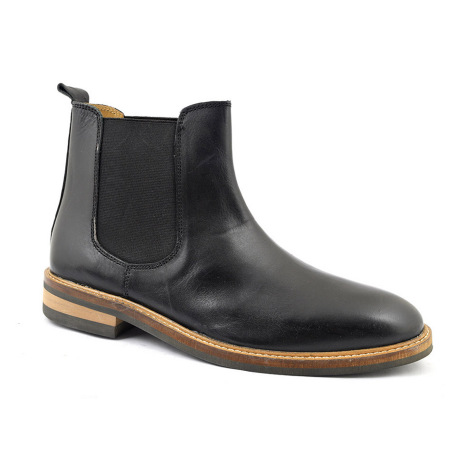 A sublime mens black chelsea boot on an almond toe last which has a hand made feel with light stitching to the outsole. So as well as being crafted in lush black leather, the sole is made of super solid leather and rubber which will mean they can be worn in many weathers! The look of the sole is light and not heavy so this black chelsea boot is really versatile and can be worn as a dress boot as well as a casual one. The origins of such a boot came when the not so casual Queen of England requested a boot be made which was easy to get on and off. Victoria wore boots innovatively made with vulcanised rubber in the sides and this style took off. So it started as a walking boot but really became a style hero in the decades when the Stones and Beatles took to wearing these chelsea boots with their sharp suits or skinny tight trousers. Of course, the mod collective continued the vibe of wearing black chelsea boots with dapper suits and a parka…the cool counter culture mixing formal and casual with verve. Today, the black chelsea boot has a similar place in that it traverses the formal and informal so well you can easily wear these to work yet rock out at a weekend in them. Designer black chelsea boots in leather with hard wearing soles. If you grab unfinished cedar shoe trees and put them in to these black boots, you will prevent creases and keep the smell fresh. Dapper black chelsea boots for original style.