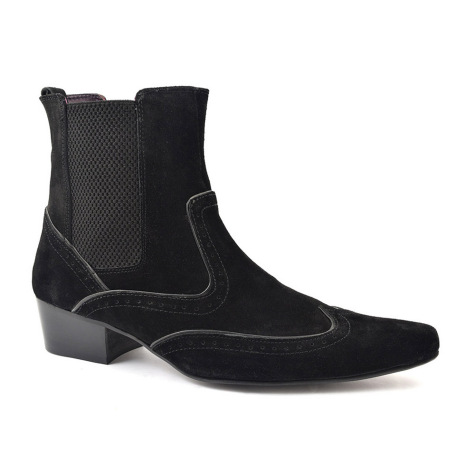 Black Suede mens’ beatle boot with side gusset and a 45 mm cuban heel. Brogue detail to the front of this chelsea boot gives it style . Such a cool boot with an interesting history (see below).

This mens black suede heel beatle boot is a rather cool and funky style of cuban heel boot. An interesting point is how much history a heeled boot has. In 9th century Persia, men wore high heels as riding footwear. You can understand how when a man stood up in his stirrups, having this heel stabilised him so he could point and shoot his arrow on target. Such mens heeled boots remained in fashion with the ostentatious Louis XIV being a prime example. This particular boot has aspects of a chelsea boot in that it has elasticated sides. Again their are royal connections as the bootmaker to Queen Victoria was requested to fashion an easy shoe to slip on and off. He did this and the Queen wore them and made them acceptable as quintessential walking boots. Over the years they fell in and out of style consciousness until the hedonistic 60s. This is where they got the name Chelsea boot as the coolest hipsters would hang out on the Kings Road in them. Famous rock stars loved them and most notably, The Beatles, took a fancy to these cool chelsea boots. So much so that they asked shoemakers Anello and Davide to make gusseted boots but also added a heel. Check out our pinterest page dedicated to them. They were called a cuban heel as they had links to Latin dance such as Flamenco.  Back to this boot: made in suede it has texture and a little brogue detail to it. The toe is pointed and there is a certain rock and roll feel to it. Wear it with skinny jeans and a leather jacket or take inspiration from the many legends who loved these black cuban heel boots like The Doors, Warhol or Alex Turner. The boss loves them and so he designed many versions for you to take your pick from.  Check him out here wearing some. Grab some boot trees and if not stuff them with paper to maintain the shape. As they are black suede, we would recommend you keeping them in a dark place where they can get some air.