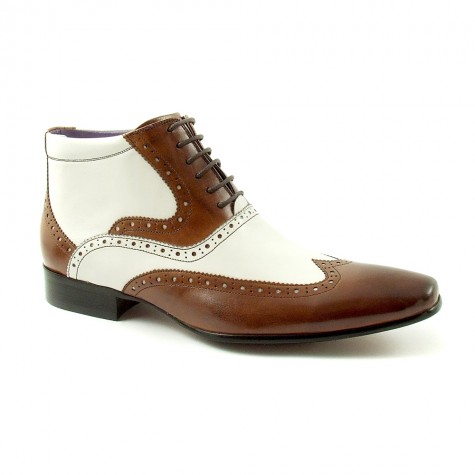 Funky spats style brown and beige brogue boot. These will jazz up any outfit and get you ready for a night of dancing. You could be dapper and wear them in the day of course.

What a funky pair of mens boots this brown beige jazz brogue is. The style has much brogues detail in the wing tip and perforation which had practical origins but is now purely decorative. What is interesting is the two tone nature of the shoe. Could they come from spats? This was a form of outerwear which protected the ankle and shoes from the very muddy streets back in the days when the streets were pretty filthy! Some call this two tone jazz style a spectator which comes from the white cricket shoe that John Lobb worked on. He decided to make the parts that got most filthy in a darker leather and so the spectator was born. From being really quite elitist style shoes, they took a different direction when two tone shoes became a staple shoe for the revellers who loved the jazz scene and the underground scene that came with it. This had elements of gangster and it is no wonder that the two tone spat became known as a correspondent shoe so named after questionable types being hauled before the courts as co-respondents. Although the Duke of Windsor popularised them in the golden 30s and 40s they became associated with gangsters again with films like Some Like It Hot. Of course, this two tone beige and brown boot also evoked a romantic era in the 20s which has also been reignited with The Great Gatsby remake. Couple that with the huge appetite for the jive and lindy hop and we can see why these brown and beige two tone jazz boots are in demand. Dapper funky jazz brogue boots for men with flair!