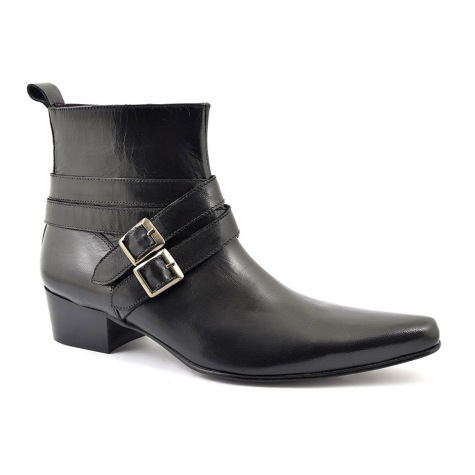 Funky black cuban heel boots which have two cross strap buckles and a pointed toe. As they are zip-up and have a tab at the back these are easy to get on and off. The heel height is 45mm. You will be in good company with these..check out a brief history below.

Strutt your stuff in these mens black buckle cuban heel boots. They have such a lot of character like the pointed toe. this is known as a winkle picker or funnily a beatle cruncher! This style of boot was made fashionable and wearable by The Beatles.  If you check the about us page you will see that Mr Gucinari (Joe Johal) himself was influenced greatly by the band and their style. It is little wonder then that he has created a wide range of these boots for you to rock out in. These boots originated in 1961 when Lennon and McCartney saw chelsea boots whilst browsing in London footwear company Anello and Davide.  They commissioned four pairs of these and added the cuban heel (associated with Latino dance such as Flamenco) which was to become an iconic look for many artists to come. Here are a few names of notable wearers of these fab boots: The Doors, The Kinks, Neil Tennant, Iggy Pop, The Kills, Russell Brand, Bob Dylan, The Rolling Stones, Andy Warhol, Alex Turner and of course, you. We can see you in a sharp suit with these black heeled boots which will have the effect of toning down the seriousness of the suit. Alternatively, they are a really nifty pair of mens boots to wear with skinny jeans. Mens black cuban heel boots with a buckle to give you style and edge to your outfit. Rest assured you will stand apart from the crowd and be seen as an original player. Be yourself!