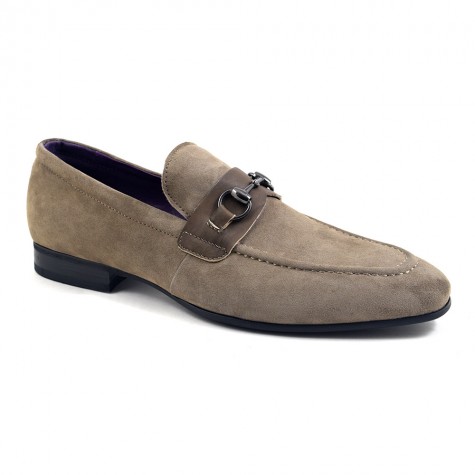 A lovely taupe colour suede loafer with silver buckle detail on leather trim. A luxury look which will work in a formal or casual setting but feel lighter to wear than leather. Simple and elegant,  it is known as the horsebit loafer due to a high vamp and a horsebit buckle on the top. Originally designed by Gucci in 1953. Still going strong today.

There are a different views about the origins of the loafer. To keep it simple, this casual mens shoe  is said to evolve from the English Royal Commission of a house shoe or from a Norwegian who took inspiration from the Native American shoe known as the moccasin. The latter were constructed from deers skin or soft leather and were meant for outdoor uses such as exploring the wilderness and running. Whether the English shoemakers Wildsmith had seen this style of shoe or not is unclear but King George IV asked them to make a country house shoe for indoor wear. Wildsmith thought of the laceless slip-on style and it became quite fashionable to wear outdoors too.

The Norwegian Tveranger travelled to the US to study shoe making and it was there he became familiar with the native amerians and their style of shoe. In Norway fishermen also wore a moccasin type shoe and hence the casual mens loafer was born.  They did a full loop and ended up becoming fashionable in the US where they were championed by Esquire and became known as Weejuns (sounding like Norweigans!)

Loafers have a distinctive strip of leather across the saddle with a diamond cut out and are popular in suede.  So why are they called a penny loafer? Again there are various explanations for American Prep students inserting a penny such as for good luck or so that emergency calls could be made (maybe for a girlfriend to call for a lift if a date was going wrong!)

They were sometimes worn without socks, but while this is now a fashion statement, in the early 1960s, for undergraduates, it was more a question of convenience or if they were late for class. They were made in brown which made them casual as black shoes were always worn to work.

Of course, the fashion house Gucci made the loafers formal by making them in black and so they became acceptable in business settings.  Men of elegance wore tasseled loafers, which originated in England. Look sartorial in these taupe suede buckle loafers.