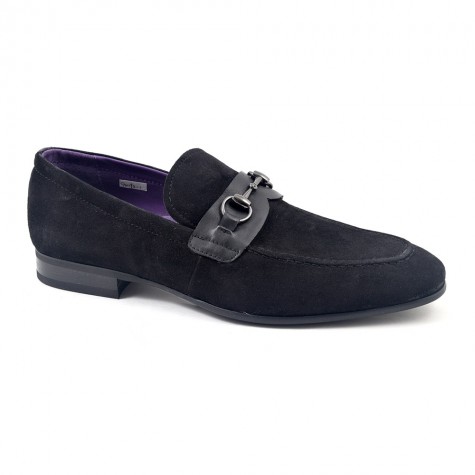 A black loafer with a silver buckle set on a black leather strap. A classic look with great texture and design detail. This iconic loafer is called a horsebit loafer which typically has a high vamp and a horsebit buckle on the top. It was originally created by Gucci in 1953. Suede is a lighter material than leather so lovely for warmer weather.

Loafers are super fashionable today. The word is a generic American term for a slip on shoe. They really should be a staple in a mans wardrobe as they cross the divide between casual shoes and formal shoes. Their beginnings are seen in a few ways. One idea is that an english shoemaker tasked with making footwear that King George IV could wear indoors came up with a shoe that could be slipped on and off easily. Another line of thought is that a Norwegian man who trained in the US and was exposed to the Iroquois (indigenous Americans) came up with the shoe. In some way, it was based on the moccasin which was made of a soft leather. Whichever way one looks at it, these shoes evolved from these beginnings: a simple construction made for comfort. Over time, they became more and more acceptable to wear outdoors and when style magazines like Esquire wrote about them, they became the height of fashion.

This black suede buckle loafer is a very cool looking mens slip-on shoe. These days, wearing them with no socks is a fashion statement but back in the 60s, students could have just been lazy and not put any socks on dashing off to class in just their loafers. Although usually this style of shoe was made in brown, the designers at Gucci had the idea of making them in black to make them more formal and acceptable to wear in a work environment. The same designer in 1958 decide to add a brass buckle emblematic of a snaffle (horses bit) to the front of the shoes. Gucci had a history in saddle making. Here the Gucci Loafer was born and it became popular around Europe. Although it would not have been considered appropriate to wear with a suit initially, a pair of mens loafers really can be worn with anything these days. However, maybe a black suede pair of loafers might look odd with a pin stripe. Having said that men are ever more experimenting and we want to encourage that so wear these suede mens casual style shoes with pride, whatever your attire.