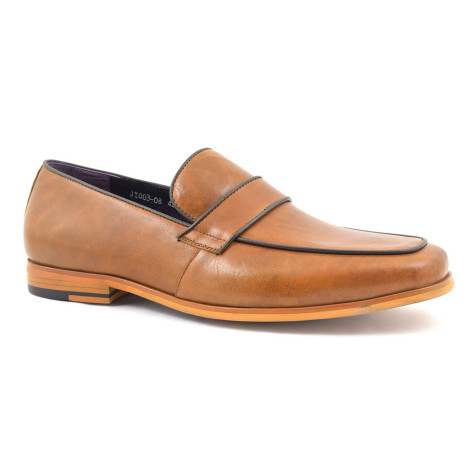 A tan loafer with a brown leather trim.

Why not take your stride in these tan loafers which have a lovely dark brown trim. They are made in leather and have a beautiful purple lining. Now, we don’t tell you what to wear at Gucinari  because you know what you like.  But imagine a beautiful blue slimline suit paired with these tan loafers, a crisp white shirt and you are good to go to that summer wedding or garden party. Mind, the great thing about this slip-on mens shoe is that you can wear them with jeans for a really chilled feel but also with a simple suit for a work day. Whats stopping you? You need these loafers in your life!

Where Do Loafers Originate?

So there are two schools of thought and one is that they are from a Norwegian from the town of Aurland who travelled to North America. Whilst there, he took the Iroquois moccasin and came back to Norway to create a loafer. The love of this shoe could also have come from the local fishermen in Aurland who wore a moccasin style of shoe. They became popular in Europe first and then the states. The editor of Esquire magazine got a glimpse of them and that was what propelled them to a fashion gem for men to stand out in.

The other idea is that a British shoemaker called Wildsmith who was commissioned to make a country house shoe for King George VI. Whether he took inspiration from the moccasin is unknown but the idea was to make a comfortable shoe to get on and off easily.

Be the first to review “Remo Tan Loafer” Click here to cancel reply.