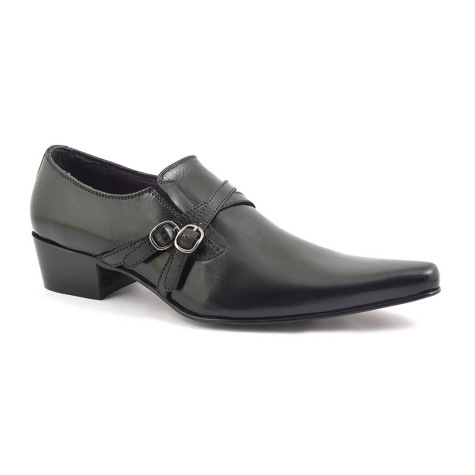 A lovely black buckle cuban heel shoe with a pointed toe. The two silver buckle straps criss cross emanating a touch of swashbuckler. The heel is 4.5 cm high and the toe is elegant and long. Mens heeled shoes to be yourself in.

A swashbuckling black buckle cuban heel shoe for dapper chaps. A really pointed toe has a rock and roll vibe which ties into the history of the cuban heel it is based on. In fact the history of mens heels goes back to the 9th century. Persian soldiers apparently wore them into battle in their horses so they could grip their stirrups and shoot their bow and arrow with good aim. If you consider cowboy boots you get the picture. At the time, everything persian became fashionable and desirable in Europe and so the heel for men came over. As the style permeated the working classes, the elite had to take it one step further and bean wearing higher heels which were totally impractical to walk in let alone work in. So the mens high heel came about. The fashion ebbed and flowed but it was Louis XIV and his love of flamboyant heels painted in red who takes the oscar for Man in Heels. He had his heeled mens shoes painted and at a whopping 10cm high teetered literally, on the edge of his toes. In the centuries that followed, women began wearing heels in an attempt to be masculine (at the time a symbol of power). Think Madonna in the 80s in her pin stripe suits. Men began to dress more lets say down to earth until the 1960s. It was then the chelsea boot was a fashionable look and The Bealtes went to Anello and Davide in the Kings Road and had chelsea boots made with a cuban heel. This was so called as it was worn by men in Latino dance. We at Gucinari carry on this mantle of designing cuban heeled shoes for men as we want to provide a range, a choice of funky wearable shoes. So check out these black buckle heel cuban heels if you want a bit of pirate, pointy, funky style.