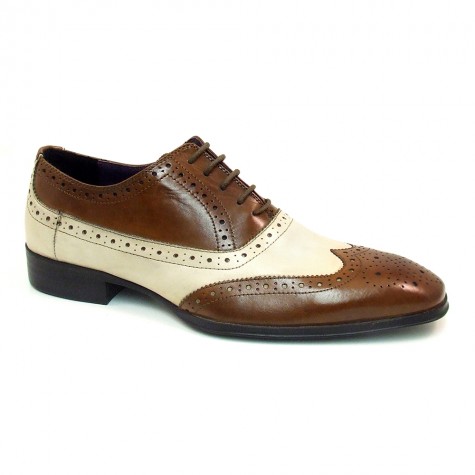 We can see you lindy hopping or dancing in these brown beige two tone jazz style brogues. They evoke the era of smoky clubs with trumpets blowing and whiskey flowing. So where did the look come from? Some say it was John Lobb who had to redesign the cricket shoe as it had been all white but it needed updating. To help deal with the dirt inflicted on the toe and heel of a white shoe, he decided to have a contrast piece of leather, initially in black. The Spectator shoe as we know it was born.  Another name these two tone shoes are known by is the Corespondent shoe and this could hark to the silver tongued questionable chaps who ended up in court (think co-respondent) wearing a two tone leather shoe. It is really around the 20s that the black and white or brown and beige two tone shoe really consolidated its identity of being linked to Jazz clubs and gangsters. Think ‘Some Like it Hot’ and you get the picture. So when you think of the type of ‘gentleman’ wearing this shoe up until the 1930s,  it is understandable why men from the upper echelons of society avoided wearing these rather flamboyant two tone shoes. But then came the rebellious Duke of Windsor who took a liking to the two tone shoe and made them acceptable to be worn as dress shoe for men. Of course, there is a return to style from the past in the revival of dance like swing, jive and lindy hop. The renaissance of the 20s is felt in films like The Great Gatsby. Men are also more inclined to experiment with different styles so this brown and beige two tone oxford brogue is a funky jazzy shoe to have in your collection. We have seen men wearing two tone shoes on their wedding day (vintage weddings are fashionable after all). Certainly these jazz brogues work well with a suit. We love funky two tone shoes here and there is no question, these are dapper!