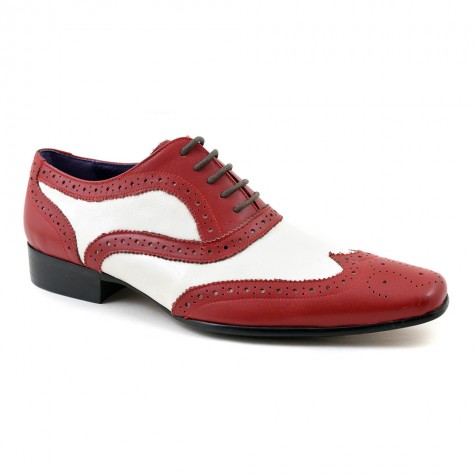 Walk on the wild side with these red and white oxford shoes. Crafted in leather, they have rose brogue to the toe cap and punch out detail to the side. Show your individuality in these funky brogues.

Imagine a smoke filled room in the 1920s and men in sharp suits and red white oxford two tone brogues stamping their feet to jazz music. Well, okay, back then they were probably black and white or brown and white but funky jazz shoes they were. Originally from the spatterdash or gaiter, this outerwear (which was often white) was created to protect officers boots from mud. They soon became a symbol of privilege and wealth and that could be why the underground musicians and gangsters of the 1920s began a love affair with these cool two tone spats. Another name for this style of two tone is a correspondent shoe and this is attributed to John Lobb who created particular style of cricket shoes. The shoes were white but he added darker leather panels to the parts that caught the mud and so this look was born. Immortalised in the film ‘Some Like It Hot’, a lot of fun was had in these funky mens shoes. However, they became acceptable again in the higher echelons of society when the Duke of Windsor wore them. In fact, many film stars wore them, including Marlene Deitriech.

This particular shoe has elements of brogue and oxford : There is a wing tip and broguing which adds interest. There is a sense of formality in that it is an oxford although these are for the more adventurous souls in the world. Oxfords may have began in the University ( or Scotland) but what has happened over time is that they have definitely become a very formal shoe to wear. Having said that if these red and white two tone mens shoes were worn to a black tie event you would certainly get noticed! And why not! Men are increasingly open to expressing them selves in the way they dress. This type of oxford brogue is just what you need to pep up your wardrobe.  Being flamboyant and dapper is no longer pigeon holed for the eccentric. If you want to dress up for a rip roaring time, why not try these very cool, very jazzy mens two tone red and white shoes.

See The Gentleman’s Gazette  for an in depth guide to Oxford shoes.