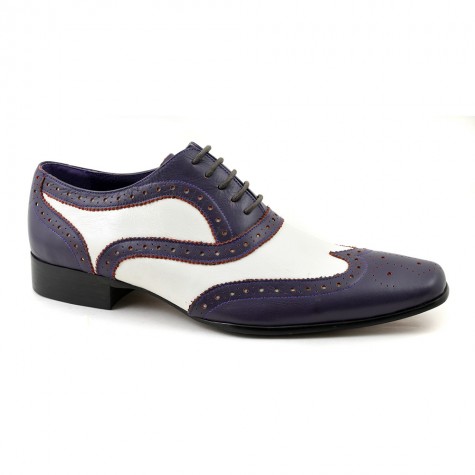 Funky purple and white oxford spat shoe which will add vibrancy to your wardrobe. Add a pop of colour to your outfit and dance in these very spiffingly cool Gatsby style shoes.

Where else can you buy mens purple and white oxford two tone brogues? This is what Gucinari are known for:  funky shoes for men. Did you know that broguing was a pragmatic requirement in days gone by for workers in fields so they could drain water from their footwear? Now you see the lovely wing tip and punch out design to the toe and it is purely decoration. We really enjoyed creating a bolder take on the spectator or correspondent shoe. First created as a white shoe in cricket, John Lobb was asked to design footwear which could handle the filth of a cricket match and came up with the idea of two corresponding colours. There is a line of argument where the name is said to come from men in divorce cases being co- respondents in court. So it is not surprising that two tone mens shoes became associated with villains and also with the Jazz music scene. Spat Colombo wore two tone shoes in Some Like it Hot and many other film stars wore them too: think Robert Redford in the Great Gatsby and Marlene Dietrieich. The dignified sense of the British gentlemen in those days meant that these flamboyant two tone shoes were not considered appropriate. However, when the Duke of Windsor began to wear them in the 1930s, he gave the green light and they became more acceptable to wear. However, world war two ended this popularity.

Recently this style of shoe has seen a renaissance with the advent of dapper gentlemen taking more interest in their style and appearance than in years gone by. These purple two tone brogues would look quite at home doing the lindy hop at a swing dance or why not wear them with tweeds in the country. They are for those who want something a bit more original than the standard black or brown footwear for men. So add a really interesting pair of jazz two tone shoe to your collection. If you want to look after them well, insert unfinished cedar shoe trees for a while after they have been worn and you can be assured this will help the shape and the odour.

Check out the Gentlemens Gazette for more on these shoes