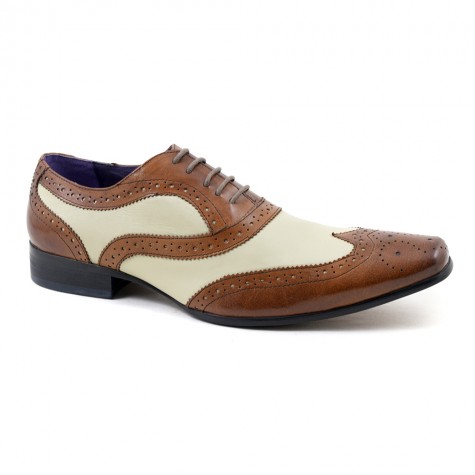 Get your 1930s feel with these Gatsby era oxford shoes.  These brown and beige spat style shoes have a wing tip and lots of brouging. Look dapper in these Gucinari classics.

This brown beige oxford two tone brogue has a very classic almost colonial feel to it. It has the fastening of an oxford shoe which is described as a closed lace system. The effect being a streamline one and therefor considered quite a formal mens shoe. It also has much brogue detail in the form of a wing tip and medallion which is all ornamental. In the past, these punch out holes were devised for the practical purpose of draining water from the shoes of workers in the fields of Ireland and Scotland. However, the main feel of this shoe is one of a spat or correspondent shoe. To be clear, a spatterdash was a piece of outerwear one attached to shoes/boots to prevent them getting dirty whilst out walking. Whereas the correspondent shoe has other origins. A rather quirky idea for why this style of mens two tone shoe was called this has been linked to the fact many people who were co-respondents in court cases might have worn them. It could easily be that the colours correspond with each other too! Also known as a spectator, the two tone came from shoemaker John Lobb who used a darker leather panel on parts of a traditionally white cricket shoe which collected the most dirt. This style of mens two tone shoe became fashionable in the 1920s with the advent of the Jazz scene. Gangsters loved wearing them (check out Spats Colombo in Some Like it Hot). Although they fell in and out of fashion, they were a symbol of wealth and eccentricity and were worn by many from the music scene through to Royalty (the Duke of Windsor brought them back into fashion in the the 1930s). The fact this is brown and beige has a colonial edge to it and is reminiscent if the formidable Robert Redford in the Great Gatsby.

These two tone oxford shoes are a really cool way to add interest to your wardrobe.  You can wear them with a light suit, linen would be good. We have a pinterest page dedicated to this style of shoe if you want some inspiration: click here.