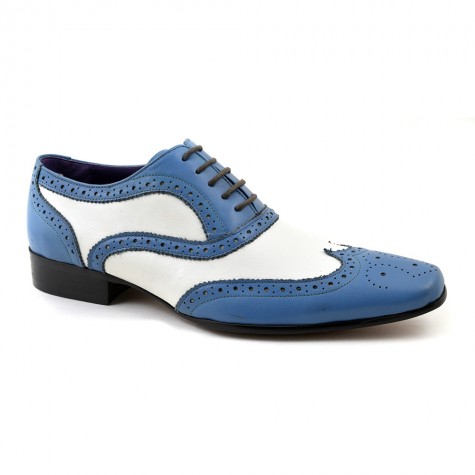 Blue and white two tone oxford spat shoe. It is a dancing shoe for sure! It has a wing tip and will be a funky addition to your wardrobe. Wear with a suit or dress them down..no-one will miss this jazzy number.

How funky are these mens blue and white oxford two tone brogues. They have many elements to them. The have the laces which fasten in a closed system. That is the main definition of an oxford and, usually, this is considered a formal type of shoe to wear. Not in this case though! There is fabulous broguing to the toe and the “W” shape which adds to the impact of this rather bold looking mens shoe. Two tone shoes originated from spats or, some say, spectator shoes. The former was a type of protective panel added to a boot if you did not want it to get dirty. The latter one can attribute to John Lobb who needed to make the white cricket shoe more resilient to mud and therefor added a different colour leather part to  the toe and heel.  In the UK we have yet another name: the Correspondent. This term could be to do with men of questionable reputation being hauled before the courts as co-respondents! It is no wonder that these shoes were made popular in the roaring 20s and in the jazz scene. Smoke filled rooms with flamboyantly dressed men in their pin stripe suits and two tone jazz shoes was not unheard of. Once they were considered a sign of wealth (the spatterdash era) but now they had became synonymous with cads and lounge lizards! The gentlemen of Britain felt they were too vulgar to wear until the Duke of Windsor began to wear them in the 1930s and made them an acceptable mens dress shoe again.

Fast forward to now. Men have more choice and are ever more experimenting in terms of their clothes. We want to contribute to men having a range of cool and funky two tone shoes to choose from and hence we have designed these blue and white two tone brogues. We also have many other colour combinations to choose from so check out the other styles (see above). These are truly a dapper and colourful pair of mens shoes to dance into the night in. Be original and be bold in these cool mens shoes.