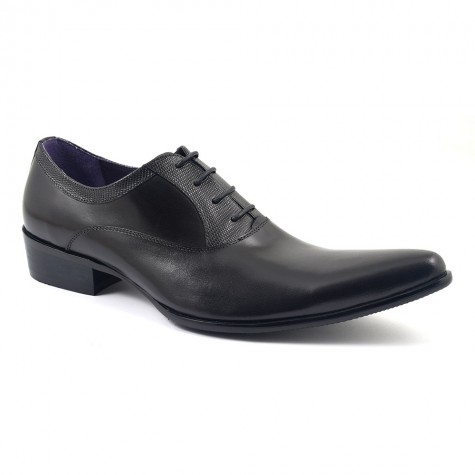 This pointed toe black oxford has a designer touch with a reptile effect leather trim to the top line and the eyelet area. Although it works in a formal setting, it definitely adds flair to the proceedings.

There is no surprise in hearing this style of shoe was made popular by students at the eponymous university. Originally, a half boot called the Oxonion was worn and later the shoe became more fashionable. The design of the oxford is defined by a closed lacing system in which the eyelet fastenings are sewn under the vamp (top of the shoe). This creates a seamless contour to a shoe which became known as a formal dress shoe. Did you know for a black tie event, a patent oxford is the one? Over time, oxford shoes became more versatile as can be seen in this black pointed toe oxford which has a rock and roll edge which tones down the formality. It has a funky side to it with the reptile effect leather inserts and all you need is confidence and originality and you are good to go.

Here is a cool guide on how to wear them : Aquila