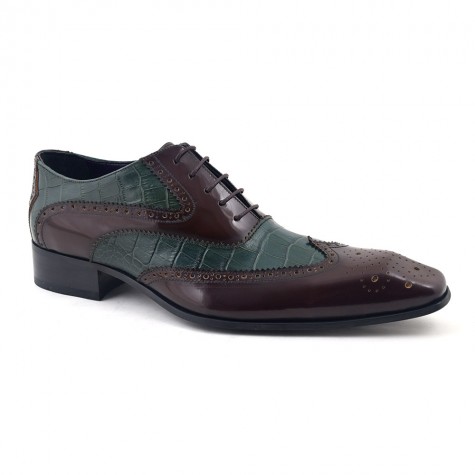 What can we call this dapper looking mens shoe? Well it has a closed lace system indicative of an oxford shoe. It has a wing tip and medallion to the toe as well as perforations associated with a brogue. Although some say the origin of the brogue is in the word ‘brog’ a gaelic word which can relate to accents, some say that ‘bog’ is closely related as Scottish and Irish men working the wet land needed holes in their shoes to alleviate water retention. This funky oxford also has origins in the spectator shoe which is identified by contrasting colours on the vamp. Another name for such a shoe is a correspondent shoe. Although this could emanate from the corresponding colours, there is also a version which pinpoints the origins of this shoe in the underworld of days gone by when cads and lounge lizards wore these rather bold looking shoes. As they may have found themselves in the divorce courts as co-respondents, the name stuck. In the 1920s and 30s, they became the favoured footwear of jazz musicians and gangsters and became synonymous with the jazz scene and the roaring 20s. Can you imagine what fun it would have been in those days?!

The fact these have a contrast racing green moc croc panel and highly burnished decadent chocolate leather make for a dazzlingly funky mens two tone shoe that would rock any party. They have a vintage feel to them but maintain a contemporary edge, particularly in the shape of the toe. Although not a staple for your wardrobe, these green brown oxford brogues are versatile and would work with semi-formal attire or a formal suit. You need a bit of attitude and boldness to wear these and although they are not considered an elegant mens footwear style traditionally, we do think these have heaps of personality and a dapper edge which would jazz up your outfit. Gucinari want to create mens leather footwear that is original and affordable so we hope you enjoy the range of mens shoes we bring you.