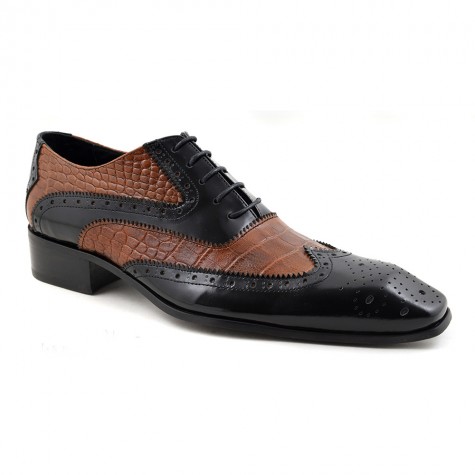 These black brown two tone oxford brogues are statement shoes to stand out in. A highly burnished black leather is contrasted by the texture of a caramel brown reptile effect panel.  A wing tip to a beak toe and brogue detail set off these distinctive mens shoes.

So this baby originates from the style known as a spectator shoe or a correspondent shoe. Usually they would be an oxford or brogue and typically have the heel and toe cap in a contrasting colour to the rest of the shoe. We just love the origins of the name correspondent: as the style became popular in the 1920s and 1930s, gentlemen considered it too flamboyant to wear and tasteless in style. It became popular amongst lounge lizards and cads who may have been known of as being co-respondents in divorce cases. It could just be that the word relates to the corresponding colours but we prefer the former cheekier version.  So the nickname began for what is considered a bold shoe for men to wear. The Duke Of Windsor made these more acceptable to wear in the 1930s and to date, they are considered a flamboyant form of footwear.

Purists would say they should be black and white or brown and white but, as with all mens shoes, these come in various styles, colours and textures. Here we have a classic brown black combination on a closed lacing system known as an oxford. This means that the eyelet facings are sewn under the vamp and the effect is a streamline one. Then there is brogue detail aplenty.  What is wonderful is the texture on this shoe in terms of the mock reptile effect leather. There is a beak style toe which also lends to the funky nature of this mens shoe.

We see no reason you could not wear this with a suit and, wait for it, wear it as an office shoe. It would work in a semi-casual way too as it would look great with jeans. There is a colonial feel to this style of shoe and a vintage one so you could lindy hop in this jazzy black brown two tone oxford. Go forth men and be original.

See The Gentleman’s Gazette  for an in depth guide to Oxford shoes.