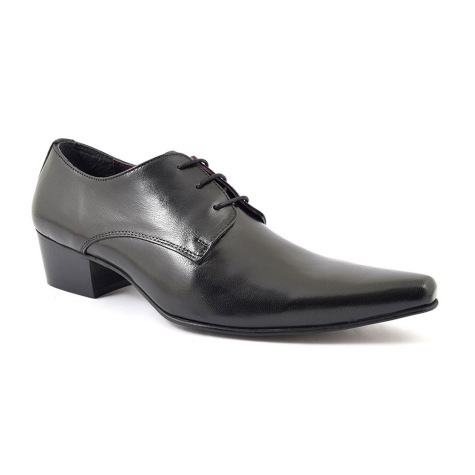 A black cuban heel shoe for men who want to rock an original vibe. The fastening of this is a derby and the pointed toe lends elegance which is cemented by the 4.5 cm heel. You can look sophisticated and edgy at the same time in these black heel derby shoes.

A gorgeously pointy mens black cuban heel derby shoe for a cool and funky vibe. Men wearing a heel was the ultimate in masculinity in Persia back in the 9th century. In fact it was practical to wear a heel when horse riding and in battle as the stance a soldier got from standing on a horse in heels allowed for a solid aim. This idea came over to Europe and as the lower ranks took on wearing a heel, the upper echelons responded by making their heels ever higher: the high heel (for men) was born! Of course, the fact men could not do a thing in their heels suited them fine! After all, the point of being in the upper classes was that you did not have to walk the cobbled muddy streets or work in a field. Louis XIV took the mens high heel shoe to new heights (pardon the pun). He wore 10cm high shoes and dyed the sole red as this was the most expensive dye at the time…we think maybe Louboutin got the idea from him! Over time, women began to want to be masculine and to do this, they too began wearing heels, smoking cigars and cutting their hair. Eventually, women took the mantle of wearing high heels and men began to dress more soberly and it became masculine to wear lower heels. Then came the 60s, the rock legends and dandies who brought back the heel for men. The Beatles loved the cuban heel and it has been around ever since. Attached to the latin dance this higher heel has been worn in many styles. None more funky and cool than this pointed toe black cuban heel derby shoe.