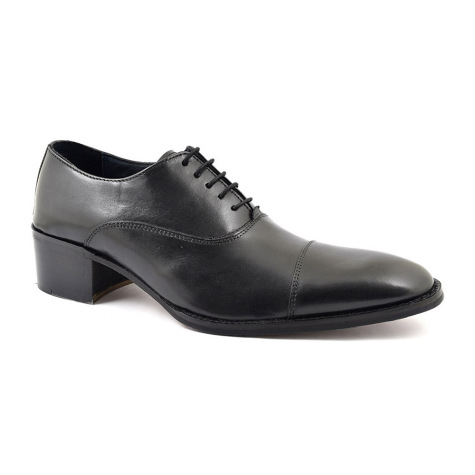 An elegant black cuban heel shoe for men who are original and stylish. This oxford lace up has a 4.5 cm heel and has a gentle curve to the toe. Why not wear heeled shoes with a pair of skinny jeans and look gorgeous.

Stand proud in these mens black cuban heel oxford shoes for a simple but designer elegance to add to your wardrobe. You will stand with men who once wore heels to go into battle. In Persia in the ninth century, mens heels were worn as a good piece of footwear to holdfast in the stirrups whilst on horseback allowing a steady aim. Over to Europe, the trend took off as all things Persian were considered fashionable. Upper class men took to wearing higher and higher heels to distinguish their status from the working classes. Impracticality became a status symbol and none is more evident than in the style of Louis XIV. His heels were reportedly 4 inches high! He also had the soles dyed red (the most expensive available) and only he and members of his court could wear red heels. Maybe Christian Louboutin read this! So mens heels were macho until women began to wear them in order to masculanise (a power thing mirrored by Marlene Dietrich in her pin stripes and later Madonna). And so mens fashion became more sombre and heels lower. Sad face. BUT the rocking sixties and the beat generation defied all traditions and went for a style that was to bring back the cuban heel shoe for men. The Beatles are said to have fallen in love with the chelsea boot and asked iconic shoe makers Anello and Davide to make the chelsea but add on the cuban heel. There we have it, the fashion for mens cuban heel shoes came back with a vengeance. Of course, today anything goes and we want to bring you a choice of designer mens cuban heel shoes at an affordable price….so here we are!