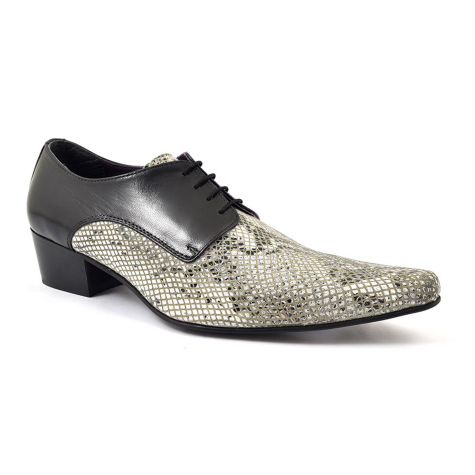 How funky are these black python snakeskin cuban heel shoes! There is a gorgeous snakeskin effect leather with contract black heel and derby lace-up panel. The heel is 4.5 cm high but the effect is stratospheric. Look original in these amazing mens funky heeled shoes.

Have you got the verve to wear those black python cuban heel derby shoes? Men who want to stand out and be original will love these snake effect cuban heel shoes with 4.5 cm and tons of edge. The panel across the vamp is a cool python effect leather and this is balanced with a black heel and lacing. When in the 9th century men went to battle, they wore heels on horses to get a good old grip of their stirrup. Mens heeled shoes were considered masculine at the time and in fact it was the Persian style that influenced the rest of europe. The aristocracy took the mens heel shoe to newer heights. As the general public wore a heel, so the richer populations shoes became higher. After all what more status for a man in that era than a completely impractical heel that he could not do much in except dandy around! Fabulous! Of course women took over the wearing of heels and the fashion for mens heels died a bit of a death. However, it was resurrected in the glory days of the 60s when young men and women took to wearing chelsea boots. The Beatles loved this boot and had shoemaker Anello and Davide construct a chelsea with a cuban heel on it. Men in latin flamenco dances wore cuban  heels and you can just hear the slam of the heel in that most dramatic of dances. Which brings us nicely to this rather funky specimen of a cuban heel shoe. If ever there was a mens shoe destined for drama and parties, it is this black python heel derby all day long.