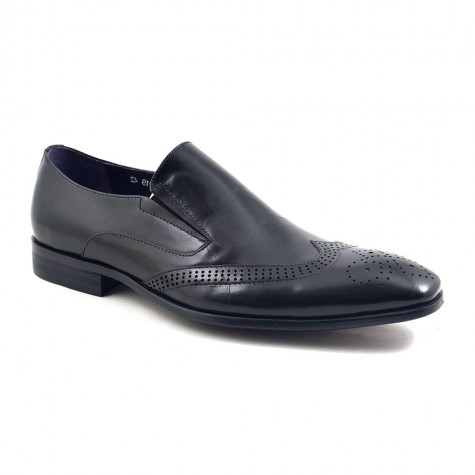 A classic formal black slip-on brogue shoe which exudes style and class. A solid addition to your wardrobe, this black slip-on shoe will work hard for you.

The Black Slip On Brogue

So how did this fabulously easy to wear mens black slip on brogue shoe originate from? They are descendants of loafers or slippers and traditionally had a moccasin like construction. Over time they became less casual wear and more office fayre when the look was similar to an oxford but with two slits at the side with rubber inserts. These side gussets make it easy to get the shoes on and off and the look is sleek. There is also a brogue element to this mens shoe with a wing tip and medallion. The brogue comes from Scotland and Ireland and the word ‘brogue’ is gaelic. Worn as country shoes they were not thought acceptable for formal occasions until now…

How to Wear Slip On Mens Shoes

Team these sleek black slip on brogues with a suit and the colour of it is up to you as black is neutral. You can tie the outfit together with a black belt and jazz it up with funky socks. This is easily going to work in a formal environment today. There is even space for you to wear these black brogues with jeans which you could smarten up with a blazer and dress shirt or go for a really chilled vibe with no socks and a short sleeved shirt. We can see a pair of shorts working with these as the art of wearing black slip on mens shoes comes from a place of confidence. Believe in your own style decisions and you will not go wrong.

Be the first to review “Ruben Black Slip On Brogue” Click here to cancel reply.