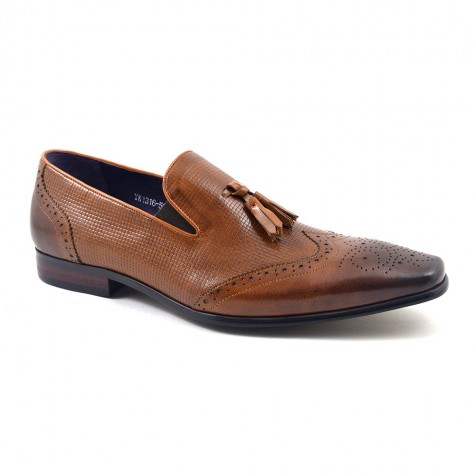 Sophisticated tan leather tassel loafer which would work with a suit as well as a less formal look. This rich caramel leather loafer has brogue detail to the toe and the heel where the colour bleeds into a darker brown.  There are dark brown elastic gussets for a better fit. There is texture with the lasered mid panel. Another designer look from Gucinari.

This mens shoe has been described as a tan tassel loafer. It is a very cool style of casual shoe and does have roots in the traditional mens loafer but it is a contemporary take on it. It has a low construction so does not sit tight around the ankle, it has no laces and has a low heel. It also has the design around the throat which is indicative of a loafer. Other than that people may consider it a simple mens slip-on shoe. It does not have the construction of the moccasin to the tea but undoubtedly has origins there. A Norwegian chap is credited with designing these from a trip to the US where he must have met native American people who wore the moccasin shoe. He went back to Norway and created them and then sold them back to America. They became known as Weejuns (short for Norwegian). Another train of thought links the origins to the British shoemakers to King Georg IV. His majesty wanted comfortable shoes to wear in his country houses and hence this shoe was born.

These loafers are tassel and are considered elegant and a bit dandyish.  The origins of mens tassel loafers is unclear but there have been links to the 1920s and a film star after World War Two.  Apparaently this dashing (but relatively unknown) actor took his tasselled oxford shoes to two shoemakers to make something a little different. Both companies sent them on to Alden shoes who created the design as we se it today. You can see in the images they are worn with a light summer suit and no socks. Although that is the rage now, you don’t have to. Although they straddle the casual and formal world, these mens tan tassel loafers are sophisticated and elegant so would work in a versatile way. They would not look out of place in an office environment, you could definitely work them at a wedding or create a relaxed vibe and wear them with jeans. They are a good looking pair of mens shoes, thats for sure!