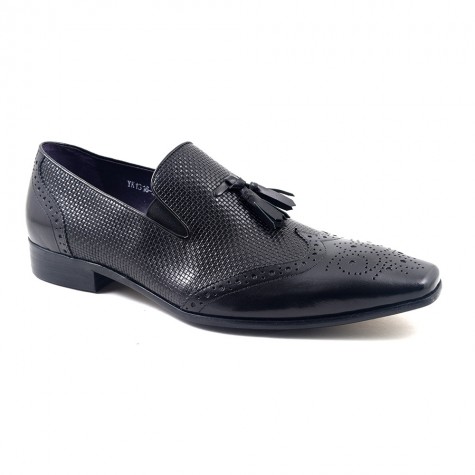 Class and style make this black tassel leather loafer a desirable addition to your wardrobe.  It has brogue detail to the toe and heel and a black elasticated gusset for a better fit. There is a lasered textured mid panel for added interest.

How cool is this mens black tassel loafer? Although the origins are in native american moccasins, some say they derive form the English. How so? A royal shoemaker was asked to create a house shoe for the King at the time (George IV) so he could pad about his country pile in comfort. There was also a Norwegian fellow who, having been to the states, went back to his home land and came up with this style of mens shoe. He drew influence from fishermen in Norway and the indigenous people of America to create a comfortable shoe in soft leather. The hallmarks of the loafer include the moccasin style design but they are also a low shoe with exposed ankle and low heel. This fact means they do look good without socks. Lovely for men to not have to wear socks in the summer months. Did you know that back in the day, it was students who made this popular by rushing to classes and in that rush, not wearing them! However they came about, they became fashionable and partly this was in the 1930s due to the publication Esquire making them a hot item to be seen in. America did a fair amount in making them popular. Although the word loafer is used as a generic term for a slip-on shoe, Americans gave the nickname Weejuns (you guessed it: short version of Norwegian).

They may have been made in brown to begin with, but the massive design house Gucci made them in black with the purpose of making them a little more formal and acceptable to wear in the office environment. It is not clear where the tassel originated but some say the UK and some the states. Wherever these shoes came from, the elegance of a tassel creates a great semi-formal mens shoe and particularly as it is black, it can be worn in many environments such as work, parties or everyday. Gucinari prides itself on creating funky contemporary mens shoes and these are an example of that. Contemporary leather black tassel loafers for men with style and substance.