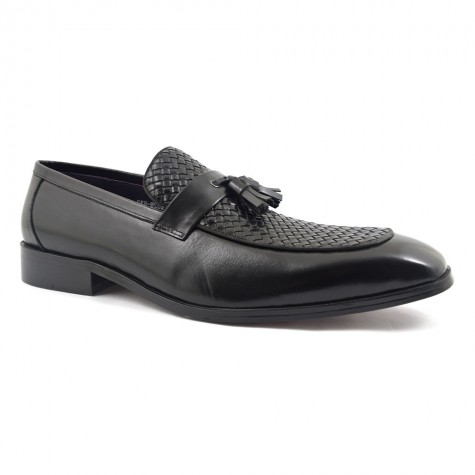 A formal sophisticated black tassel loafer in leather for men who are stylish. The front of the vamp has a weave panel and tassel detail.

A black tassel loafer so smart you can wear it in many ways. We can see you wearing these with a suit. A sharp cut suit with a lean feel to it, a white open button shirt and these shoes. No socks will be cool, minimalist and very now. If you fancy dressing your jeans up then wear these loafers and they will do the trick. This slip-on mens shoe would work with linen shorts in navy and and a polo with a pullover. So versatile are these black loafers, you will wonder how you ever did without them!

Mens’ loafers have been in vogue since the 1930s and were adapted from fishermens’ shoes in Norway (hence called Weejuns). The penny loafer was first to find fame in the campus universities. However, they were casual shoes and were not considered worthy of the serious business environment dominated by mainly oxford shoes and derby shoes to an extent.

A little known American actor, Paul Lukas bought some Oxford shoes in Europe which had tassels on the laces and took them back to the States as inspiration where he asked a few companies to create a pair of shoes he loved. Both the companies he approached interestingly took them to the Alden Shoe Company and it was here the design changed from lace up to slip on. The tassles remained  as a memoire of the original shoe and hey presto, the tassel loafer was born.

This tassel loafer is sophisticated and a little more formal than the penny, it has style and at the time of Lukas, took off as an elegant slip-on with the freedom of the slip-on. Joy!