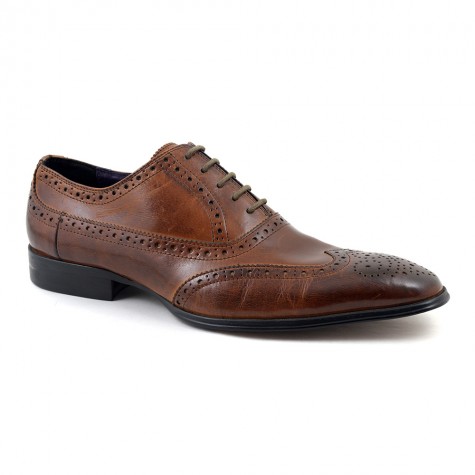 A lovely deep brown burnished leather oxford which has a wing tip and brogue detail. It is a formal brogue but has a contemporary feel.

As the name suggest, the beginnings of the oxford can be attributed to the university. Did you know that there was a “half boot” called an Oxonion? This is way back in the 1800s. Somehow this morphed into a shoe which had slits on the side ( much more comfortable than buttons etc) and over time, those slits were replaced with laces. The heel which used to be higher (popularised by Louis XIV) became lower and the ankle became exposed. So this shoe which had student origins (although some dispute this and claim it came from Scotland) has become known as a dress shoe. In fact, those in the know would wear a patent black oxford for black or white tie events. Those who have originality might wear them in the day, especially as there are so many variations such as different colours or brogue detailing.

This brown oxford certainly has a lot of broguishness. Check out the “W” on the vamp (also known as a wing tip). The edging to this leather has the serrated edge, there is a pattern to the toe and punch out to the side. How fashionable are these shoe today?! Would you have guessed the humble origins of this type of shoe was trying to deal with wet conditions? Yes, in the Scottish and Irish countryside back in the 1800s, people made holes in their shoes to drain water. The word ‘brog’ also denotes regional accents such as the Scottish or Irish accent so there is another link to that part of the world.

Enough history, what about today? There are no rules in that you can wear any style of shoe whenever and wherever you want if you have the confidence. Men are increasingly making efforts to look good and nothing says more about your style than a good pair of shoes like this brown oxford brogue. Look after them well. They are worth it. Check out our blog for a quick and easy guide to caring for them.

A fabulous guide to brogues can be found here: https://www.gentlemansgazette.com/brogues-shoe-guide-men/  and see The Gentleman’s Gazette  for an in depth guide to Oxford shoes.