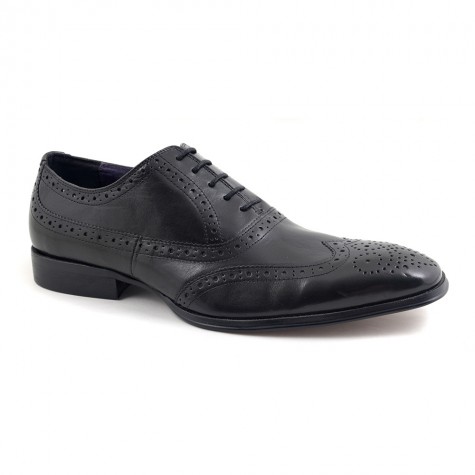 Burnished black oxford brogue style lace-up shoe.  It is a classic design with a beak toe made by Gucinari: the mens’ footwear designer.

This mens black oxford brogue is a classic dress shoe which has a wing tip which has the detail of a serrated edge. There is also a medallion and punch out detail to the side. These characteristics are particular to the brogue which historically came from the Scottish or Irish requirement for shoes that worked well in water and marshland. The holes were created to deal with such conditions so farmers/country folk could walk the boggy land. Originally made with untanned hide, this style of shoe was frowned upon in formal settings which has totally turned on its head in todays world where brogues are at the height of style. Of course, the Oxford has always been considered the most formal of shoes and are the style of choice when it comes to evening/dress shoes. For black or white tie events, a black patent oxford is on spec. This black oxford is not patent but has the sleek silhouette an oxford shoe affords. This streamline feel makes this mens shoe sit on top of the hierarchy tree of formality. Having said that, the heavy broguing does soften that formal tone making it a little more versatile so it can be worn with smart trousers as well as a suit. This mens black oxford brogue is a solid design and will be a shoe that gives off style, formality and chic. You can invest in shoe trees as looking after these oxford shoes will bring longevity. If you try unfinished cedar you may find the added benefit of eliminating bad odours. We bring you dapper black oxford brogue shoes for men who think smart.