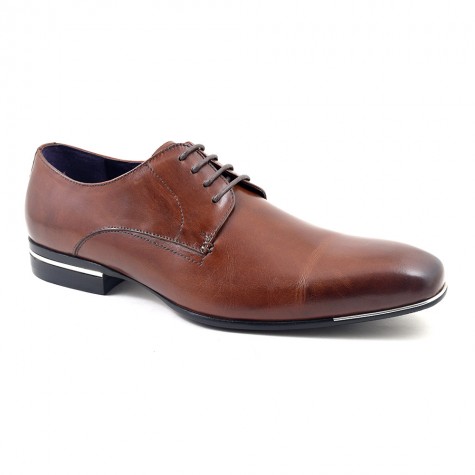 A metal strip to the toe and heel of these formal tan derby shoes make them stand out. They make you stand out. An original design by Gucinari.

This shoe is characterised by the shoelace tabs which are sewn on top of a single-piece vamp. This is known as ‘open lacing’ and is the opposite of the Oxford. It is also known as a Gibson or Bulcher (American). The derby was a popular hunting and sporting shoe in the 1850s but became appropriate to wear in town by the turn of the 20th century. The name has been linked to the Earl of Derby although there are conflicting accounts of which one. We like the version that it was the 14th Earl of Derby (see Gentlemans Gazette below) who was portly and supposedly had large feet so his bookmaker made these open boots to get his feet in more easily. Although the Derby is less formal than the Oxford, it is a versatile shoe which can ‘straddle the formal and informal world pretty efficiently’ (see Gentlemans Gazette below).

Funky mens shoes are a trademark of Gucinari. The brand saw a gap in the market for mens funky shoes like these tan metal strip derby shoes and have been providing much choice for men in designer shoes and boots for many years. The focus is in creating desirable yet affordable mens footwear. Be original. Be yourself. Gucinari is Dedicated to Style.