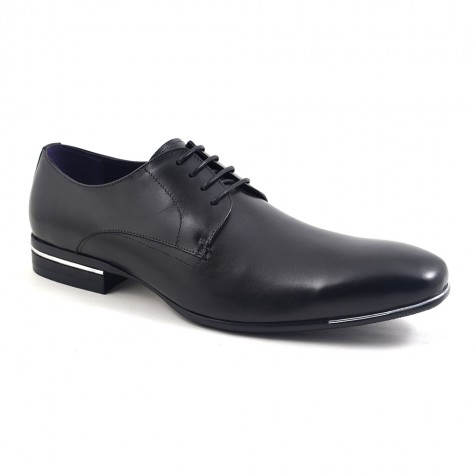 A black derby shoe with a metal strip across the front of the toe and the heel. A twist on a formal derby shoe, these have character and originality. Be yourself in them.

Why have a black derby when you can have one with this cool strip which adds edge. Just a subtle touch which makes this funky lace up mens derby shoe stand a little apart form the standard formal shoe you might own. The idea is to create a contemporary look which is original yet not too crazy so it can be versatile.  It has an open lace system which classifies this as a derby shoe. The definition is down to the lace tabs being sewn on the vamp exterior. The thought for this came from the bootmaker of the Earl of Derby who needed a shoe that would open wide enough to fit the larger feet of the Earl. So the derby shoe was born from a place of comfort and pragmatism. Even though it was a sporting shoe to begin with it soon became more acceptable to wear in town and eventually morphed into the formal shoe it is today. See the Gentlemens Gazette for a great article on derby shoes.

Funky mens shoes are a trademark of Gucinari. The brand saw a gap in the market for mens funky shoes like these black metal strip derby shoes and have been providing much choice for men in designer shoes and boots for many years. The focus is in creating desirable yet affordable mens footwear. Be original. Be yourself. Gucinari is Dedicated to Style.