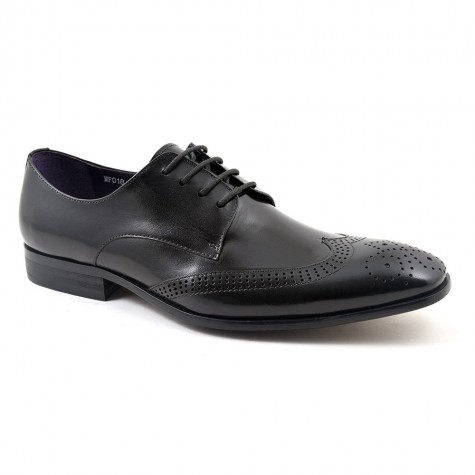 A solid formal  black derby brogue shoe with wing tip and brogue detail to the toe. Crafted in fine leather, these will look smart with work wear and show you mean business.

This mens black derby brogue is crafted in a highly burnished leather and has a formal appeal. To explain a derby, there is the vamp which wraps across the front of the foot and two quarter which wrap around the heel and fasten above the vamp. This is an open lace system which is in contrast to the oxford shoe. Although the latter is the more formal, these days the derby is commonplace in such settings too.  With beginnings linked to the Earl of Derby, this style of open lacing was constructed as the most effective way of getting the said Earl’s somewhat large feet into his shoes.  If you hear the term Blucher, consider it the same as the derby shoe. However, the story is that the Prussian Army Officer called Blucher redesigned army boots so they could be pulled on and off easily. He devised the two flaps (quarters) below the ankle which would lace together and this was of great benefit to those with wider feet. It also made the task of getting boots on for battle a quicker one. This particular mens black derby has brogue detail to the vamp and toe only. These intricate holes and wing tip originated as a practical way to eliminate water from shoes when working wet fields. Now they are purely a design feature and we would not recommend them for boggy marshland!

This black brogue has a formal edge to it with the black heel and simple brogue detail therefor it can be worn with a suit and is a great staple shoe for any mans wardrobe. We have a large range of other black formal shoes also so do check them out. Whichever you choose to buy, look after them with these tips. You could invest in shoe trees. We recommend unfinished cedar as they are best for odour with the shape of the shoe staying in tact if inserted immediately after wearing. Do give your black derbys a quick clean and polish if you have time. For those short of time, stuff some paper in them to maintain the look and if it rains, this is a great way of getting rid of moisture.