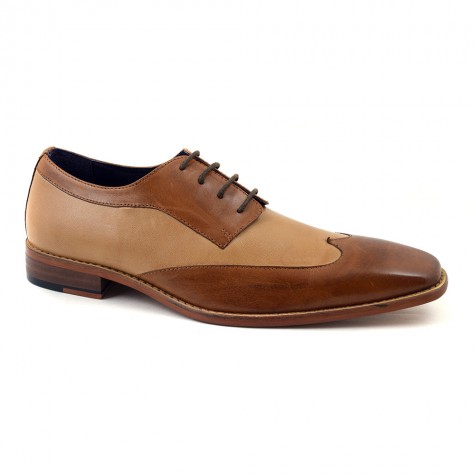 Gorgeous camel and tan wing tip derby shoes which evoke nostalgia yet remain modern. This formal dress shoe is a formidable addition to your wardrobe. It has class, style and quality. A contemporary classic.

Named after the dapper Robert Redford in the Great Gatsby, this mens brown and beige two tone shoe is born from  the spectator shoe or spat. The word ‘spatterdash’ means outer wear to cover the ankle and instep and protect shoes and socks from mud and rain. These were worn by the wealthy in the 19th and 20th century and so symbolised wealth and eccentricity. This derby could be classified as a spectator shoe as it has two distinct colours. Also known as a corespondent (maybe to do with men of questionable backgrounds being co-responderts in court cases) they became associated with the jazz scene and gangsters. ‘Some Like It Hot‘ gave them new infamy as the mob boss was called Spats Colombo, obviously because he wore them.

These are generally considered bold shoes to wear but there is an elegance about this two tone derby and a mellowness. The colours are gentle and it has a wing tip but other than that, it is quite simple. The characteristic of  derby is that the shoelace tabs are sewn on top of the vamp. Some call this ‘open lacing’ as opposed to the closed lacing system of the oxford. Also known as a Gibson or Bulcher, the derby was popularised as a hunting/sporting shoe in the 1850s but like a lot of other shoes, became acceptable to wear in town. The name could be accorded to the 14th Earl of Derby who was rather portly and had to have shoes with flaps to allow his feet access!  The derby is considered a less formal shoe than the oxford traditionally. However, this particular shoe is versatile although there is a colonial feel to it due to the colours. British gentlemen wore brown and beige canvas shoes in the days of empire. This camel tan two tone derby has a vintage feel and a simplicity about it but one can imagine in the past men dancing at a jazz club in them. Now, wear them any way you like, with a linen suit or for a wedding, you will look fine, thats for sure.

These are great publications: https://www.gentlemansgazette.com/derby-shoe-blucher-guide/