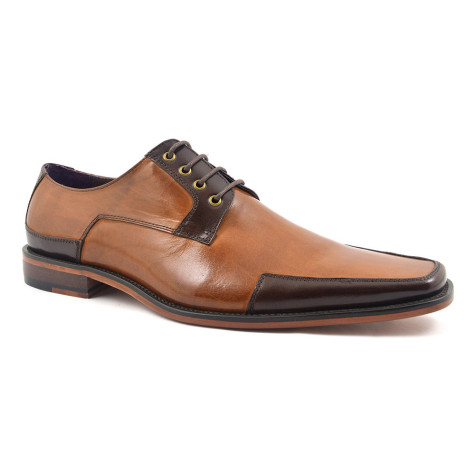 This mens tan brown derby is a lovely caramel leather and has panels in sumptuous dark brown. There is something quirky and cool about these mens lace up leather shoes.

A quirky tan brown derby which takes the two tone mens shoe to another level. The spat 1930s style is dapper but Gucinari likes to push the boundaries and have designed this baby instead. The lovely caramel leather is off set by delicious dark brown panels and the effect is original and funky. If you have a wardrobe which commands a little je ne sais quoi and you do not ascribe to the traditional every day then these mens derby shoes are for you. They would look cool with a smart suit and make the feel more of a relaxed one. Equally, they would work with a pair of jeans and have an edgier appeal

Many people like to know the difference between these and the answer is formality. The oxford has closed laces and the derby has open flaps the eyelets are sewn into. Essentially, the oxford is much more formal and the derby originated as a country shoe. In fact, the reason for its existence was the King George IV asked his shoemaker to design a pair of shoes his large feet could get into easily! Over the centuries the mens derby shoe has become a more business affair as lets face it, trainers took the mantle of casual shoe. There is a cool video made by Gentlemens Gazette here for a visual explanation should you be so inclined.