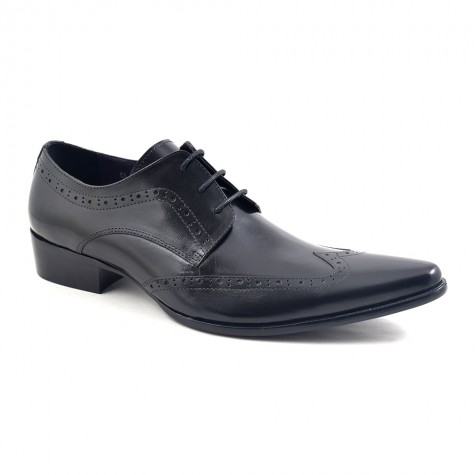 A black derby with pointed toe. There is a wing tip and brogue detail. The defining feature of this shoe is the very subtle metal pin detail to the toe which make these a touch original.

NEW BACK IN : Tan available here

This pointed toe black derby has an elegant last and designer touches with the really subtle dull metal pin detail surrounding the toe. However, the history of the derby is not so sophisticated. It was the large Earl of Derby who needed a shoe that would be easy to get on and off his large feet. His bookmaker came up with the idea of the open flaps and that now defines what a derby shoe is. The derby was a more casual shoe in the 1850s: a hunting/sporting shoe but over the century, it became perfectly respectable to wear about town.

The other element of this shoe is the fact it is a brogue. This has a wing tip which is the W shape to the toe which is adorned with holes (broguing). But the holes in brogues came from a place of functionality. It was imperative that workers in the fields of Scotland and Ireland had shoes that could drain some of the water and hence holes were punctured into their shoes! Over time, they became more of a country look and were not deemed suitable for formal occasions….until more recently. See the Gentlemens Gazette for more.

Tying those threads above together, we reach modern times where men are at liberty to wear derby brogue shoes in the most formal way or the least. Wearing black derby brogues for work, social occasions or in a casual sense all works. The pointed toe in this black derby gives it an original edge to the traditional rounder toe of the derby/brogue. We can see a sharp suit with these elegant derby shoes but we can see skinny indie jeans too. A world of ideas to play with, tits all about what you can create with your style, whatever that may be.

Be the first to review “Frank Black Derby” Click here to cancel reply.