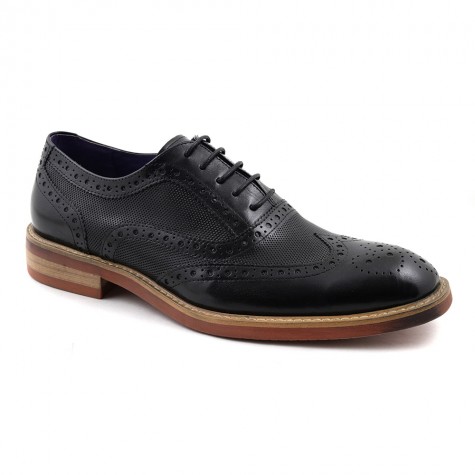 A lovely burnished leather black oxford brogue which has a modern twist. There is the traditional wing tip and rose brogue to the toe cap and punch out detail to the top line and side. In contrast is a mesh micro-diamond cut laser detail which gives these mens brogues a contemporary twist.

This mens black oxford brogue straddles the formal and informal camps. It has formality in the sense it is an oxford style shoe. This originally was a shoe which became fashionable as a result of students at Oxford Uni  (early 1800s) wearing them (well, the Oxonion which was a ‘half-boot). A shoe is made of two quarters and a vamp. The quarters wrap around the heel and the vamp wraps around the top of the foot. In an oxford, the vamp is on top with the quarters underneath and hence the laces are known as closed. There are some who associate this shoe with Scotland (hence it is also known as a Balmoral).  J Saprkes Hall mentioned them as “oxford” shoes by 1846, so, however the name originated, it had caught on by then. This particular mens oxford has a lot of brogue detail to it which lends itself to the more informal camp. There is the wing tip ( that is the “W” shape to the toe) and punch out perforations all along the side. You would never have guessed that this hole puncturing was actually required to get water out of peoples shoes once they had worked on the boggy land of Scotland or Ireland.  Now, these decorative designs bring interest rather than purpose.

This particular black oxford brogue has much detail. There is diamond laser cut to the insert for a modern vibe and outer sole stitching for a hand made feel. You could easily wear these black brogues with a suit to work and they will create a more relaxed feel than, say, a plain black oxford might. The beauty of this shoe is you could also wear them with casual trousers or denim and they would look pretty cool. However you wear them, wear them with pride. Look after you oxford brogues and you will not be disappointed. If they get wet, a top tip is to stuff them with newspaper and that should absorb the moisture. A lovely example of a mens black brogue.