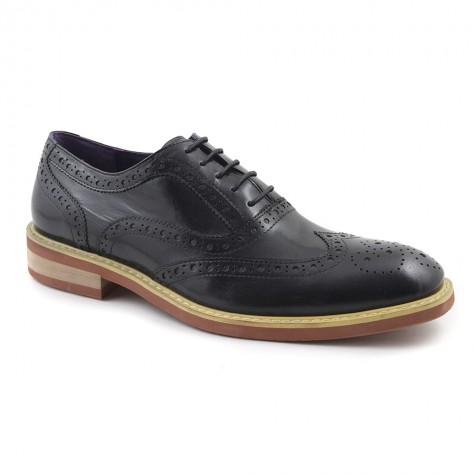 A smart casual black oxford brogue with rose brogue and wing tip to the toe cap and punch out detail to the top line, side and heel. The outer sole has contrast stitch and the heel is stacked giving a relaxed feel to these mens brogues.

Do you need a shoe to wear to the office that isn’t too stuffy but that you can wear at the weekend? Look no further. This mens black oxford brogue is just the ticket. It is formal enough due to the oxford nature of this shoe. And informal enough due to the brogue aspect. Why is an oxford shoe considered so formal when it was actually worn by students at the eponymous university to begin with? Well, thats time and fashion for you. Over a period of time, men began to wear the oxford as their shoe of choice to black tie events. We think the streamline look of the closed lacing system could have been part of the reason. See The Gentleman’s Gazette  for more info on mens oxford shoes. Much the same can be said regarding the brogue side of things. Practicality was the name of the game when these style of shoes first had holes punched in them in the Scottish and Irish countryside. Workers in the fields were marred with wet feet otherwise. Brogues have made a huge leap from that into a shoe that has been at the height of fashion in recent years. Want more info? Try here.

This particular black brogue does not feel too stuffy as it has stitch detail to the lighter outer sole.  A plain black sole would look more formal. Having said that, there is no reason  why this would not work with a suit. It is versatile enough to be worn day or night too so it is a great looking versatile brogue to have in your wardrobe. It is worth getting an unfinished cedar shoe tree as this will keep the shape of this black oxford brogue and also deals with any unwanted smells! You could also give it a quick clean and polish now and again. Check out our guide for a quick clean here. We have much choice for men who love style and design and we hope you enjoy our mens shoes as much as we have enjoyed creating them for you. We are dedicated to style!