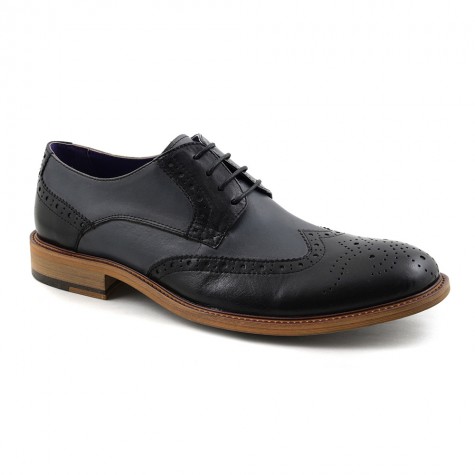 A contemporary brogue with contrast black and cool grey leather. There is wing tip and punch out detail as well as stitching to the outer sole. A very cool addition to your wardrobe.

What a contemporary take on the derby brogue this mens shoe is. The contrast of the cool grey and the black leather is lifted with a lighter coloured sole. It is a modern look for men to style with suits or with casual wear, such is the versatility of this black and grey brogue. The two tone nature of this mens modern brogue is a subtle one and means that it would look just fine in an office environment. It is a relaxed take on the mens derby brogue and one can see this shoe with casual attire at the weekend. Check out this guide for a good read.

The History of the Derby Brogue

What defines a derby? Well, its the fact the lace tabs are sewn in the top piece called the vamp which creates flap like panels. Essentially this style of shoe is much easier to put on than say the oxford which is more slimline and closed in the way it laces. In the US this shoe is known as the Gibson or Bulcher but it is really the Earl of Derby who can be attributed the name. For it was his need for an easier shoe to wear that produced this open lace system. So once the derby was a country shoe but now it traverses the world of formality just as well. What defines a brogue shoe? It is mainly the holes which perforate the leather. In the Scottish and Irish wetlands, untanned hides had such holes inserted to drain off water from the shoes of workers. Now, these are beautifully decorative instead!