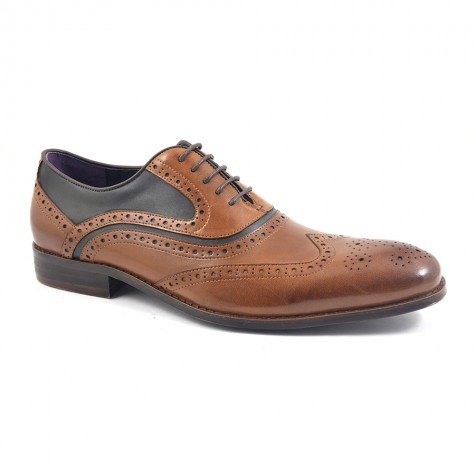 An oxford brogue with a wing tip and brogue detail to the toe. There are panels of navy leather which are decorated with broguing. These are full of character and inject originality and a bit of fun.

History of the Brogue and Oxford

Lets start with the brogue aspect of this shoe. Originally worn by farmers in Ireland/Scotland who worked in boggy grounds, the perforations were inserted to drain off water. Gaelic in origin, the original practicality of this shoe soon morphed into a heritage style which is seen as super fashionable today. The oxford side to the shoe is the silhouette which is sleek and fits like a glove. In contrast to the fuss of broguing, it provides a minimalist touch. Historically, the shoe was thought of as originating from oxford university students who wanted a simplified version of the half boot they wore. Although some say the origins are Scottish and hence refer to the shoe as a Balmoral.

Recently, the formality has been pushed aside with designs such as this tan navy oxford brogue which has a down to earth feel due to its two tone nature. The results are that these shoes can be worn in many ways. As long as you are confident, you can pair with a suit or with jeans. We say there are no rules but if you want ideas, try these with a navy suit or dark jeans to begin with and the more they are worn the less formal you can be with them.