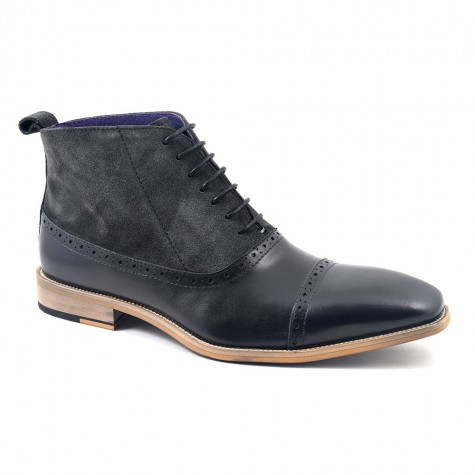 Add a touch of sartorial to your wardrobe with these lovely black leather and dark grey suede balmoral boots. They have lovely brogue and stitch detail and you can dress them up or wear them with jeans.

Balmoral boots are oxfords in the form of a boot which means they have a closed lacing system. They also have a distinctive seam line from the back to the front of the boot creating an upper and lower part which can be of different colours/materials.  The Balmoral was originally designed for Prince Albert who wanted a walking shoe to traverse his Balmoral Estate in Scotland but also something stylish he could wear indoors. Queen Victoria took a liking to these boots so got some made too. It is no surprise that they became so popular with the gentry and later, the general public.

Balmoral boots can have various brogue detailing from wing tip to full brogue. You can find much interesting detail in this article in The Gentleman’s Gazette.