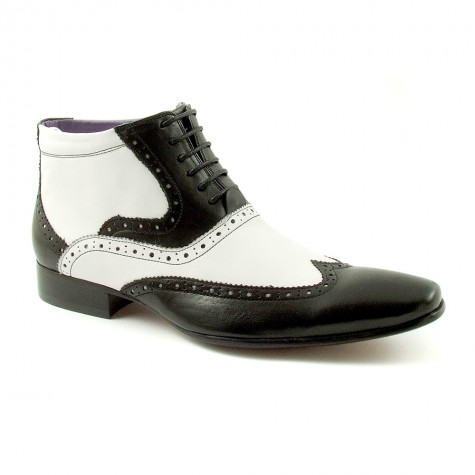 Get that legendary Gatsby style with these black and white mens spat brogue boots. They are statement boots which will be the talk of the party. Brogue detail and a zig-zag trim make these jazz boots extra fine. Look sharp!

Get a vintage feel with these mens black white jazz brogue boots. They are two tone boots which will take you back to the heady days of jazz and swing if you so wish. Although the beginnings of this type of shoe could be in a spectator, they could be traced back to spats too. A  ‘spatterdash’ was on outer garment on a shoe to stop mud from getting onto your shoes. The fabric was originally white but as streets became cleaner, the need for them was less. Of course, the two tone black and white look was made famous in the gangster style and jazz clubs of the 1920s onwards and were considered a flamboyant riskee style to be seen in. Another name for this black and white two tone style boot is a co-respondent which some attribute to the questionable cads who ended up in court as: co-respondents! In between, the Duke of Windsor made them more acceptable to wear as he loved them in the 30s and 40s. Interesting when you think that spats in the early days symbolised wealth and eccentricity…until in the  film ‘Some Like It Hot‘ when Spats Colombo changed all of that. There is brogue detail to this shoe which adds more interest and makes this a funky black and white boot. Fast forward to today and there is a real stylisation of that era with the advent of electro music and swing dance. So grab yourself  a pair of these mens black and white two tone jazz boots to have yourself some vintage fun. Funky boots for funky times.